The Uckermark region with its rolling hills, woods and lakes has long been popular with nature-lovers, but has now also become a destination for those who appreciate good architecture. It is the location of two holiday homes, located just a few kilometres apart, designed by the Berlin architect Thomas Kröger. One is an open-plan new build, and the other an old barn in a village. They may appear completely different at first glance, but both houses are perfect examples of the way Thomas Kröger adapts his style to suit the context. The Berlin architect always builds with respect for environment and landscape, and his houses reflect their locations and local traditions while having a contemporary feel to their design.

When building the “Black House”, the starting point was a large plot in the little village of Pinnow, and the owners’ desire for a mainly open-plan house with some private space and capacity for 8 to 10 people. It was to be designed so that the natural surroundings and changing seasons could also be experienced indoors. “A kind of glass box in the meadows” was what the owners wanted – and they got their transparent building! 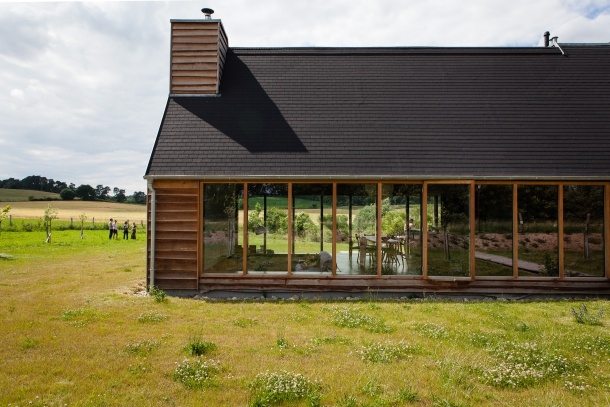 The house is designed so that its occupants can enjoy far-reaching views over the countryside. Unlike its neighbours, it is positioned parallel to the quiet lane, which may make the house easier to see into, but gives much more extensive views. The architecture blends well with the neighbouring single-storey village houses; even the larch cladding is typical of the region and can often be seen on barns in the area. Indeed, this long building looks a little like a barn – except for the numerous windows along the façades. The house is open to the landscape and the choice of colour for the interior sets the scene perfectly. The floor is of mastic asphalt, and walls and ceilings are all black, giving a feeling of security and pushing the architecture to the background as the focus is drawn to the outside. 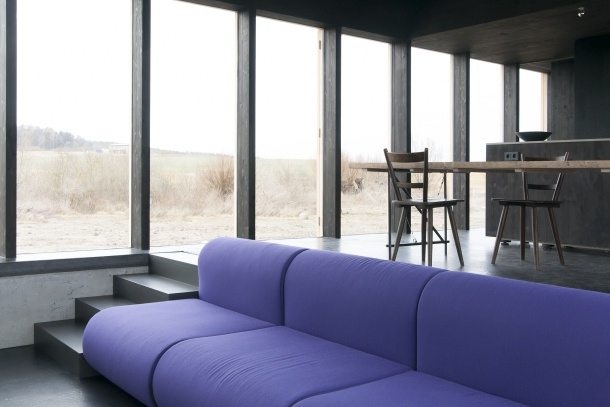 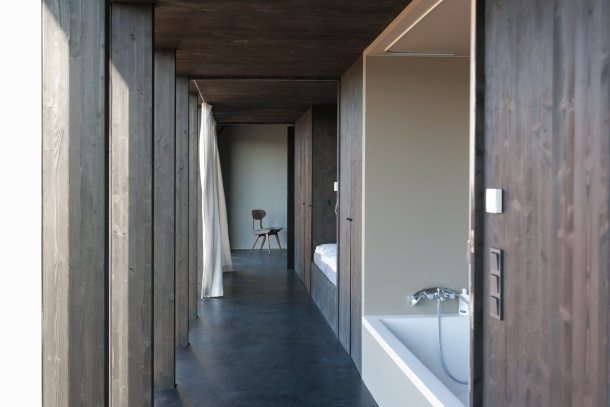 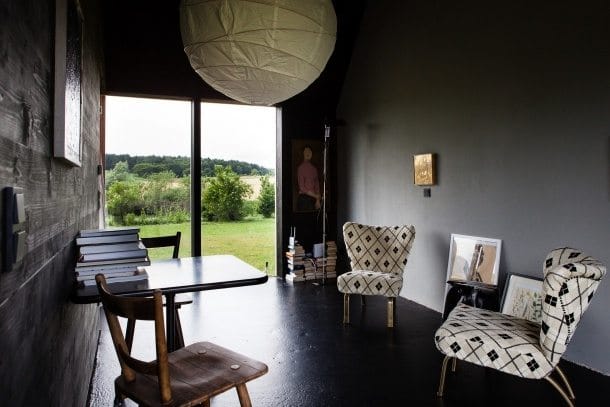 The building not only has transparent walls, but its interior is also designed for a sense of openness. There are no separate rooms, but the house is arranged in zones. On the outer long walls, using the house’s full 6-metre length and open to ceiling height, are a living area, a few steps below the main level, and a reading room. In between are the dining room and a centrally located internal core. This block houses the kitchen, the stairs to the children’s bedrooms in the attic, two alcoves and the bathroom. These areas can be closed off with sliding doors, creating plenty of privacy if required. But whether you are lying in bed or the bath, you can enjoy the views of the surrounding countryside from anywhere in the house. The alcove with its landscape views is one of the owner’s favourite corners.

The starting point for the Country House in Fergitz was rather different from that of the Black House. This was not a new build, developed in harmony with the landscape, but an existing structure in a built environment. The owners had fallen in love with the old barn. However, they didn’t want to convert the whole building (“we didn’t need 20 rooms”) but wanted a different solution for making the huge structure habitable. 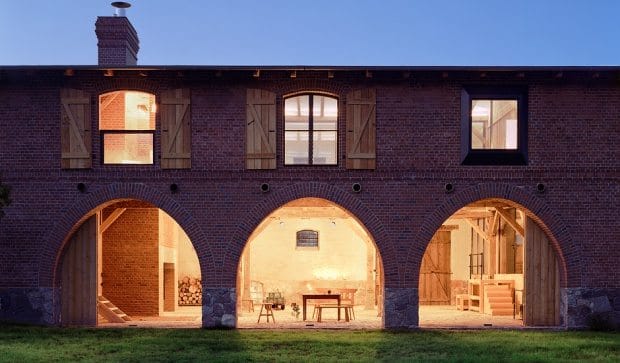 Kröger converted the barn into a house with an additional holiday home. The new use isn’t apparent at first glance – the façade of the former cowshed that faces onto the street remained more or less unchanged and the building as a whole is still recognisable as a barn. The elevation facing the garden was opened up with three generous windows. It was completely gutted inside to show off the beauty of the timber framework and the spaciousness of the interior to full effect.

The heart of the house is a central hall with an open fire. Otherwise unheated, this space connects inside and out, and provides light for the living rooms grouped around it. 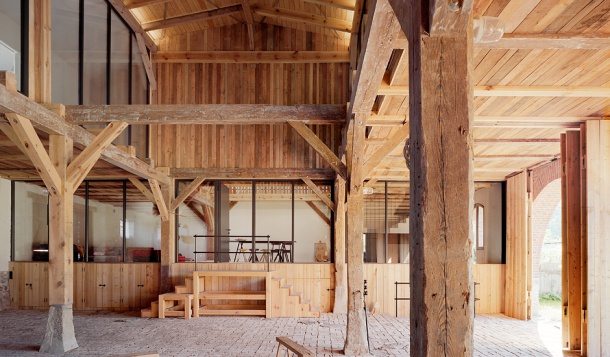 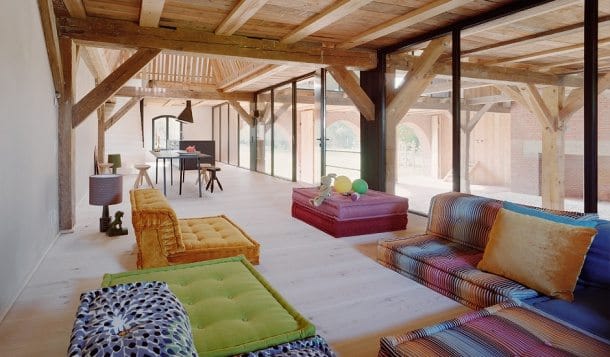 On the ground floor, raised a few steps, is the living, dining and kitchen area. The wooden pyramid above the dining table is a light shaft to bring natural light to this area. The first floor houses the bedrooms, guest room/study, bathroom and a balcony, and these rooms are fully glazed where they look out over the hall. This means that the barn is also an open-plan house – but unlike the Black House its rooms do not open out onto the landscape, but into the barn’s interior. The owners love this transparency, but since many of their guests prefer a little more privacy, they have hung curtains in the bathroom and guest room. 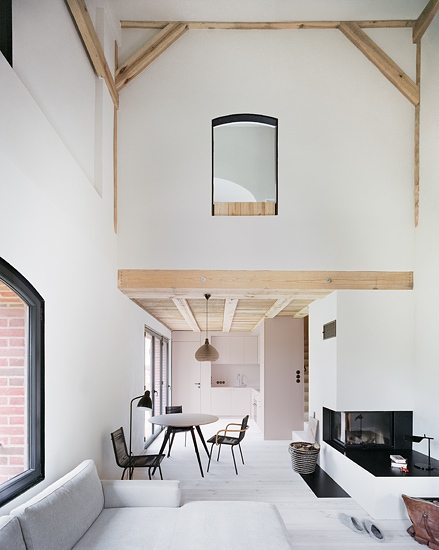 The holiday home (Red Barn) on the gable end of the barn is in the same style as the main house. The entrance and living room, with a ceiling height extending to almost 7 metres, recall its former use as a barn. One of the two first-floor bedrooms has a window looking down into the living area. The select, minimalist furniture and subtle fixtures and fittings place the emphasis firmly on the architecture.

In the next village is another Kröger creation – the Werkhaus Schütze in Gerswalde, for which, in 2014, he won the architectural prize “House of the Year”, an accolade also given to the Black House. Thomas Kröger is currently designing and building further projects in the Uckermark region, which will bring his total to seven houses. His passion for the rolling hills of the moraine landscape gripped him while he was still a student. On his trips to the region back then he sometimes slept in the back of his car because there was very little overnight accommodation in the villages. The fact that he was approached a few years ago almost simultaneously by three different property owners with projects located so close together was sheer coincidence, he claims. The buildings in the Uckermark mean a lot to him, as “even the smaller projects such as the Black House have attracted a lot of attention for the practice and have ultimately led to larger projects in Munich, Berlin and Frankfurt.” 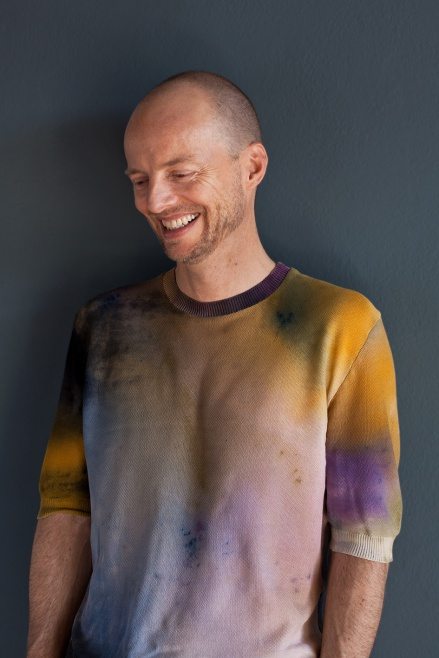 Kröger also likes to travel abroad, to get to know other cultures and find inspiration for his work. When asked about his ideal holiday home, he replies, “The house or hotel should be an adventure in the best sense of the word – it should offer something different from the familiarity of one’s own home.” He believes that it is important to respect nature, and that a house should fit into its surroundings. It should radiate peace, and allow its occupants to concentrate. He refers to friends who told him that, when staying in the Black House, they often didn’t go out, but spent hours sitting on the sofa and gazing out over the landscape.

So it appears that Thomas Kröger has succeeded in building his ideal holiday home. And he will never again have to sleep in the back of his car due to a shortage of accommodation in the Uckermark…

Before founding his Berlin architect practice TKA Thomas Kröger Architekt in 2001, Thomas Kröger worked for Norman Foster in London and Max Dudler in Berlin. Kröger is best known for his buildings in the Uckermark, but his work extends far beyond rural architecture. Together with his team, he works in Germany and abroad on projects that include private houses, offices, commercial developments, museums and galleries.

Anke Steinweg is Operational Manager and Content Manager at HOLIDAYARCHITECTURE