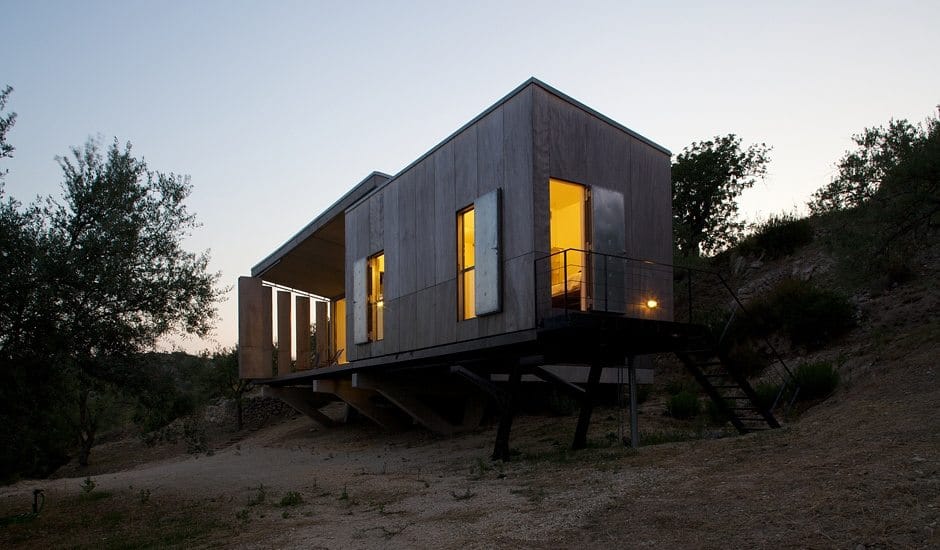 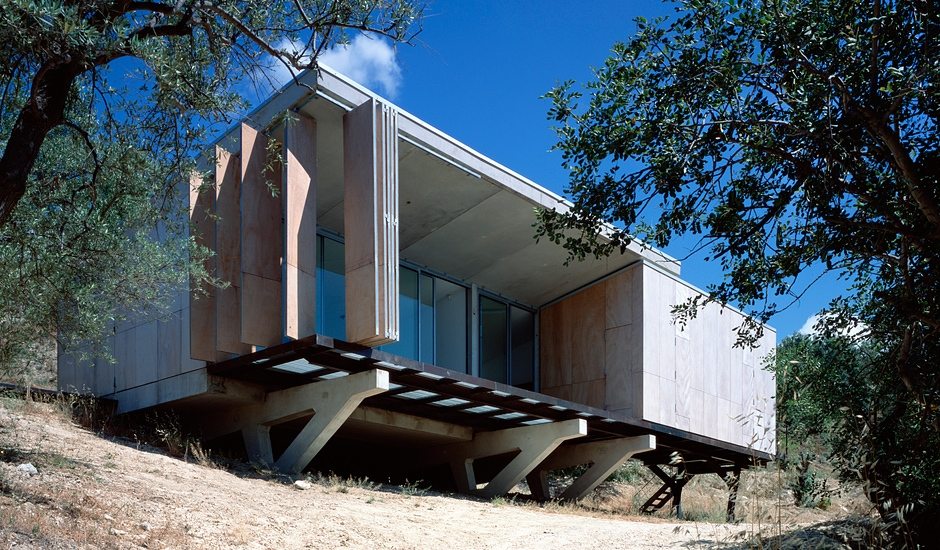 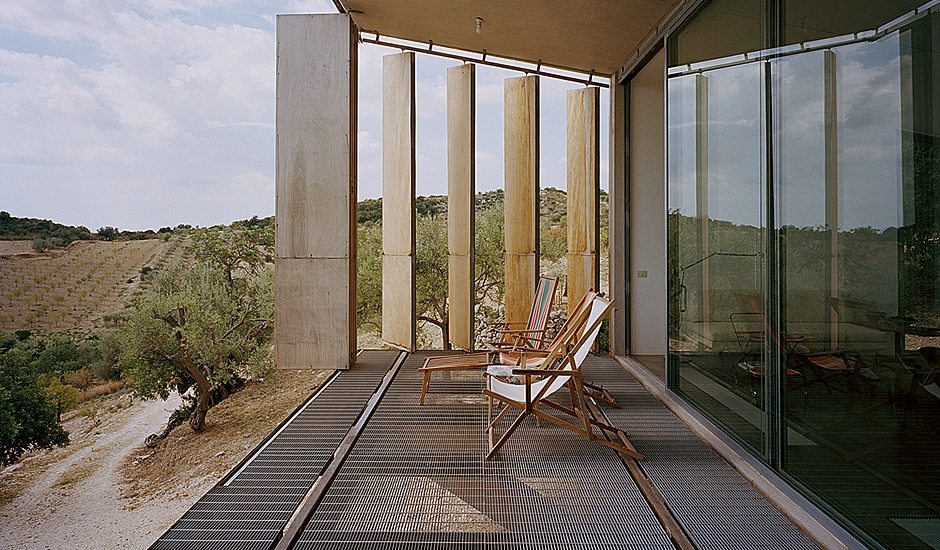 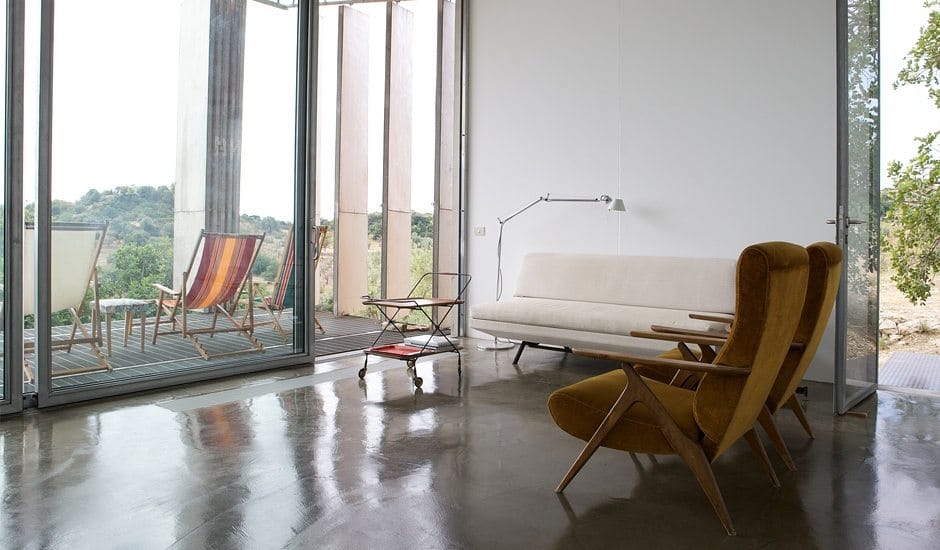 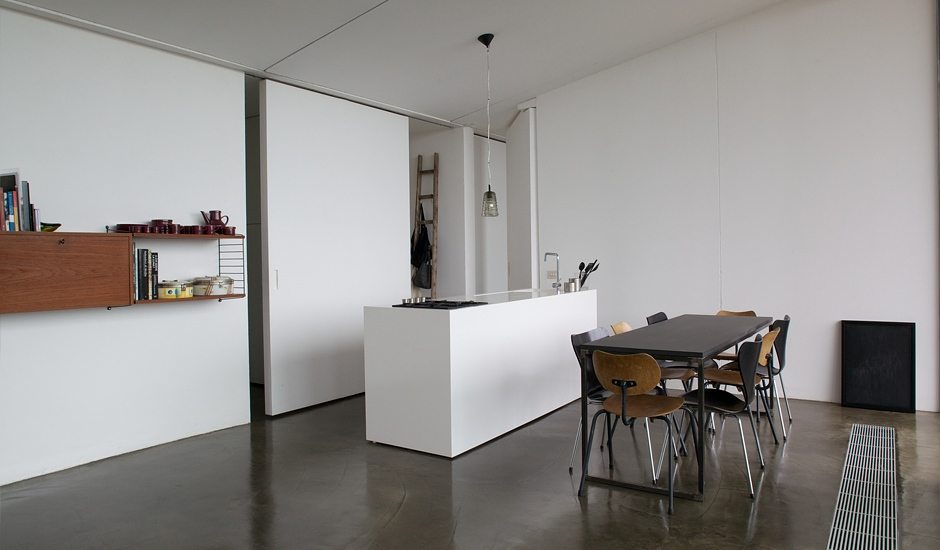 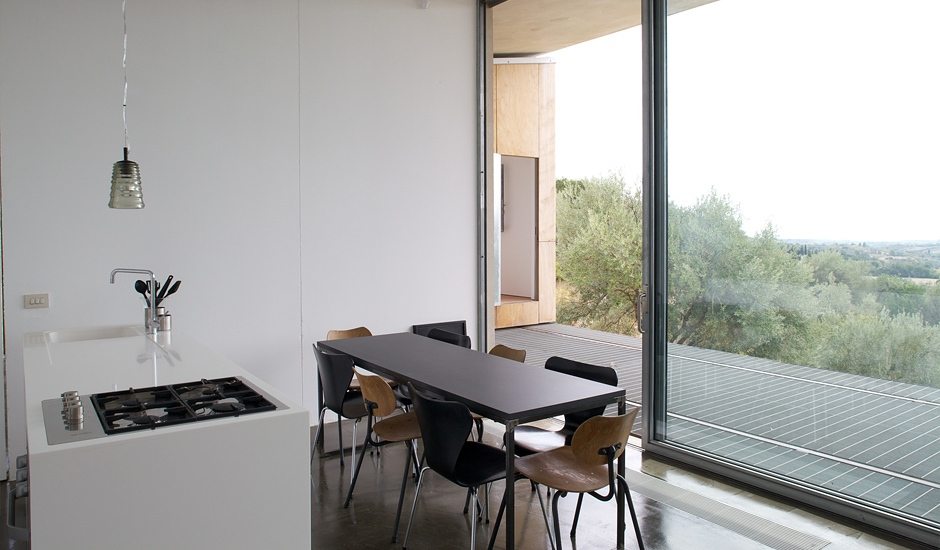 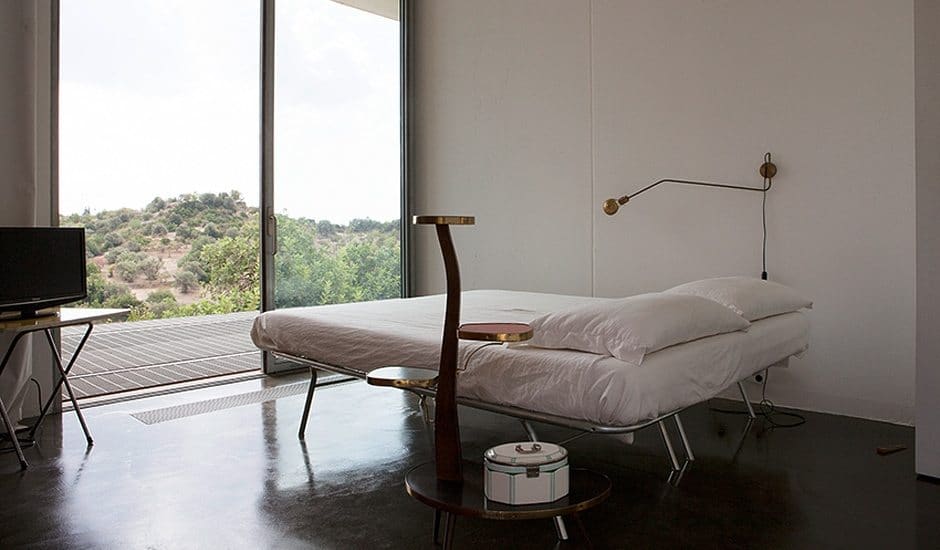 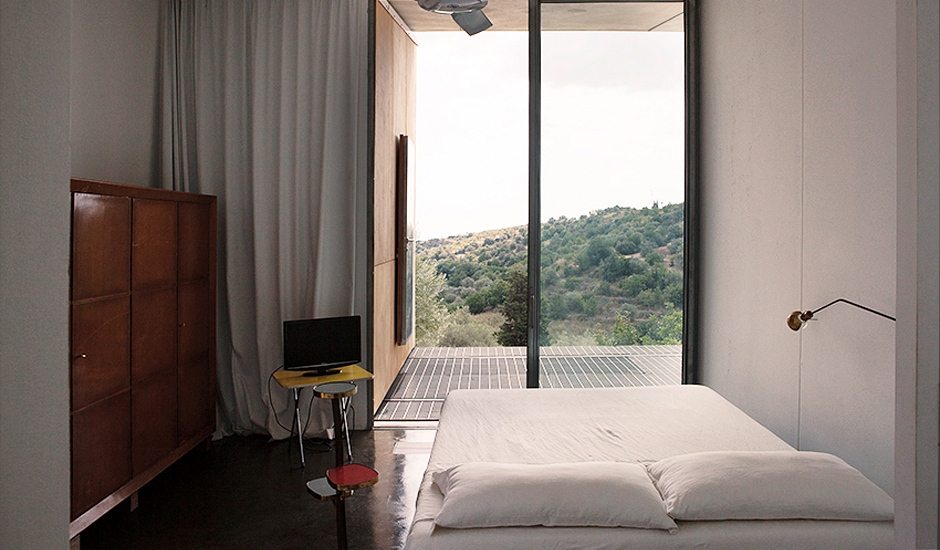 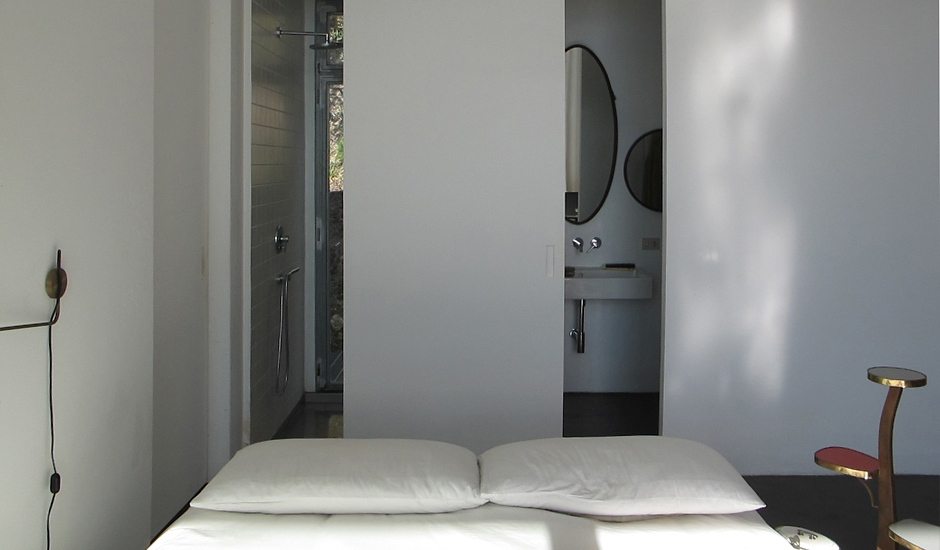 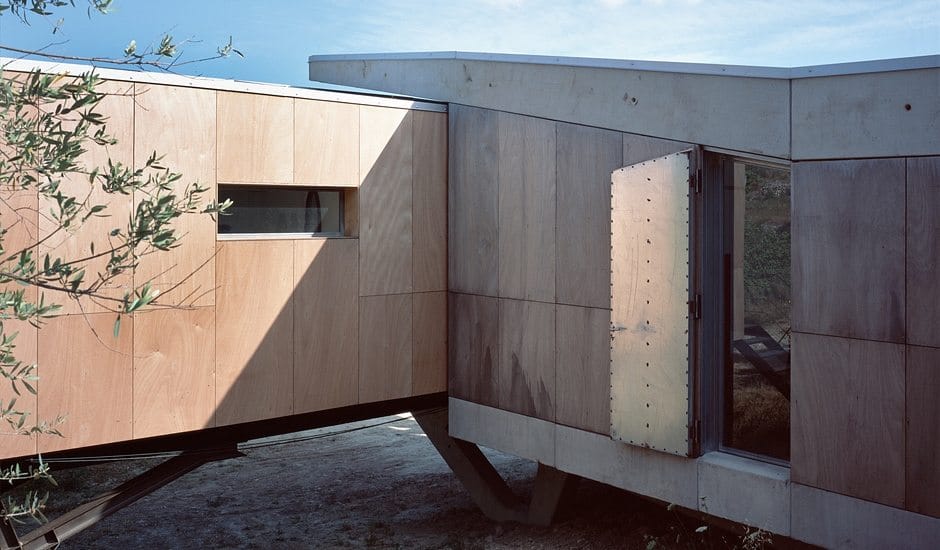 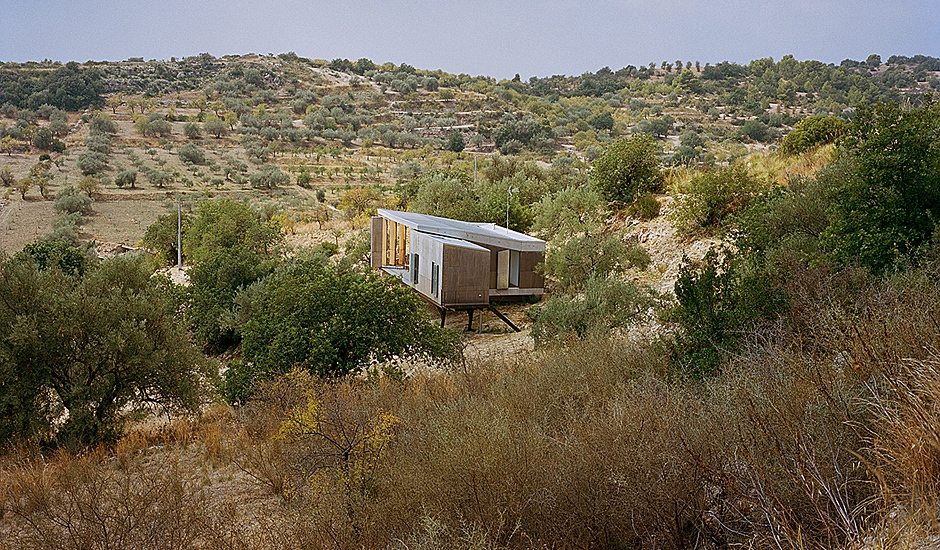 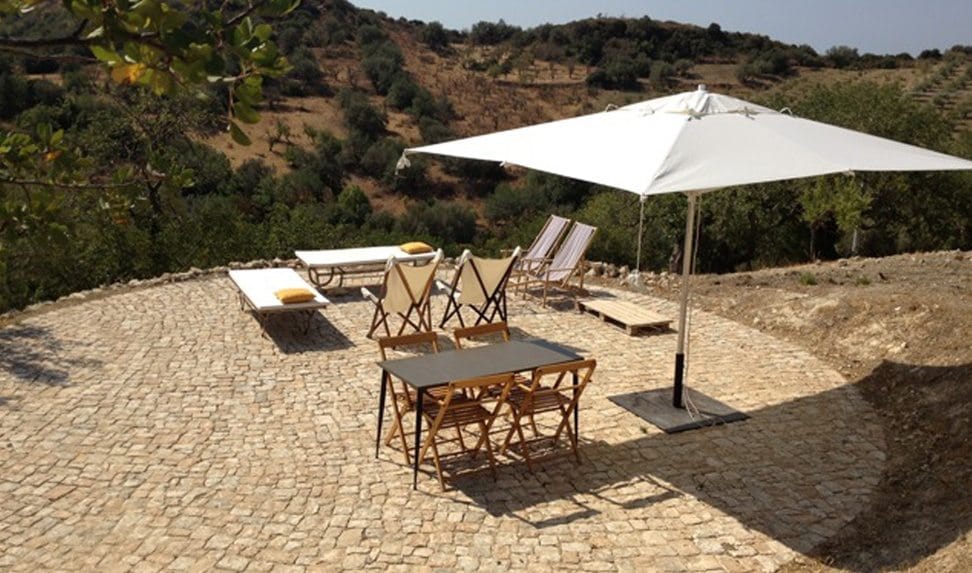 From a distance, it seems like a wooden box is floating on a hill overlooking the archaic Sicilian countryside. La melagrana is pitched on concrete beams and offers a view of the sea shimmering in the distance. But only in the open state. When the house is unoccupied, a guest wing sits like a protective wall in front of the large windows of the main house. The guest house can be electronically moved to the side, thus revealing a view of nature as well as giving access to the terrace. Apart from the living room with a kitchen, you will find a bedroom with en suite bathroom in the main building. Two more bedrooms and a bathroom are located in the guest house.

You’ll find yourself nestled in the Val di Noto, one of the most spectacular baroque art sites in Sicily and listed as a World Heritage Site by UNESCO since 2002. Suggested visits to: Noto, the natural reserve of Vendicari, Modica, Scicli,Ragusa Ibla,Palazzolo Acreide, Siracusa.

Couples, travellers in search of a quiet, inspiring place, friends

Scenery: in rolling countryside with views to the sea

Number of guests: up to 6 people

The architecture of this house is simply amazing! The surrounding calm and beautiful with a view to the sea from the terrace. We will recommend this house to our friends!

la melagrana has been quite a discovery and has very much inspired us! The way it occupies its site, the logic of its structure and the poetry and simple clarity of its interior and exterior spaces and its furniture are marvelous. The question of living reduced to its essence! It will surely inform some of our future projects.

A wonderful house, in a wonderful setting! Perfect in the wintertime, as it all feels like spring! Everything went easy!
Our friends came already the second time, and we will sure sure come back as well!

We’ve stayed for two weeks in December at Melagrana – a wonderful place. Stunning architecture, beautiful and calm surrounding. An amazing way to start the day is to see the rising sun from the sleeping room.

This place is amazing! We had a fantastic week at la melagrana and really felt at home. This beautiful house has been created with love and attention to detail. The perfect place for people who want solitude in the middle of a great landscape.

We stayed at la Melagrana for a week during our honeymoon and we couldn’t have asked for a better place to get away from it all and just enjoy some peace and quiet (and a beautiful view over the Sicilian country-side!).

Mid July we had the pleasure to be at the Melagrana. For us, designer and architect plus kids, a wonderful experience. The house is conceptual great and unique! In its design very practical and lot of space for 4 people, would even be easy for 6. The separate space with the beds is airconditioned, which during the summer is a very pleasant. The highlights are the kitchen and its view over the valley as well as the balcony where we have been sitting long hours drinking our Sicilian wines in the evenings. The area is beautiful with Noto, Siracusa, Scicly, and Modica as absolute highlights. For having a cool down the beaches nearby are very clean, not too busy, except from the weekends, nice white and sandy. Also try out the Cava Grande, a unique nature experience with stunning swimming ponts of natural water. All in all La Melagrana is a winner and gives you the absolute chance to recover from busy lives and enjoy the Sicilian lifestyle. We will definitely come back again.