The early morning view from the giant picture windows is one of endless brick façades, rail tracks and a yard, with an expansive sky looking down over it all. Before my eyes, artists wander in and meet the cameras of the day’s first tourists.

I wonder just where it is I have come to. It feels like I’m sitting in my own private version of the song “Am Fenster” [By the Window] by City – an unofficial anthem of the former East Germany. Back then, in 1977, all thoughts of freedom had to be suppressed, or coded as in the lyrics of this song.
While in the here and now, I sit enjoying my complete freedom in the loveliest rooms in the Baumwollspinnerei, the Leipzig Cotton Spinning Mill complex, one of Leipzig’s most vibrant locations, in the city where the Monday Demonstrations heralded the demise of the dictatorship in the autumn of 1989.

Manfred Mülhaupt, who runs the Meisterzimmer, is originally from West Germany, but made his home and found his own freedom here after German reunification. Or you could say he passed this freedom on to us, his guests.
He designed the four very individual loft-style studio apartments that have come into being over the course of recent years. On the one hand, the “Meisterzimmer” testify to the cultural history of the place, reaching back to the industrial past, while also making a totally unique contribution to today’s creative incarnation of the Spinnerei, a true focal point of the art world.

His guests spend the night in rooms that once housed the women’s changing rooms, a workshop and even a transformer room, but are now at the heart of one of Germany’s best-known creative quarters. It makes this accommodation the perfect place to sit and find your own muse, or use as a base from which to go out and be inspired in the numerous galleries and studios, the cinema, the theatre and the various cafés and shops on the site. Or, of course, to do both.

The freedom of empty spaces

Like most of the twenty buildings that remain on the site, Sheds 18 and 20, which house the Meisterzimmer, are in very good structural condition. Brick walls over a metre thick characterise most of the complex, along with cast-iron casement windows and cork insulation beneath moss-covered roofs. These are so extensive that in the Second World War, bomber pilots mistook them for fields, thus ensuring that the Spinnerei remained largely undamaged.

When Manfred Mülhaupt moved here in 1994 with a number of fellow artists, the majority of the 100,000 m² useable space was standing empty, and the present-day slogan “From cotton to culture” was as much a distant dream as constant room temperatures and other such luxuries.
But what was there in abundance was a wealth of empty space, vast expanses and the freedom to experiment. 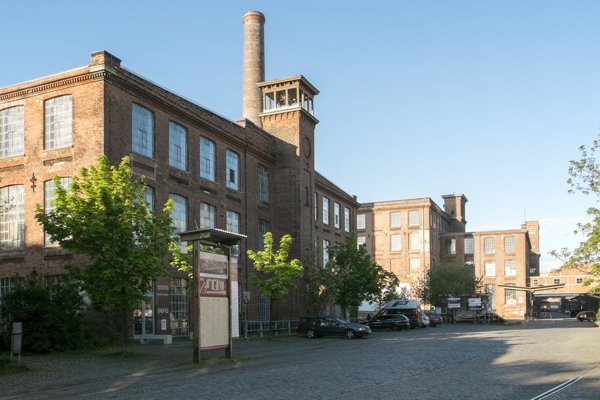 Photos of the Baumwollspinnerei today (above, photo: Manfred Mülhaupt) and in the “wild” transitional years of the 1990s. In those days, Meisterzimmer #1 was where people lived, thought and experimented – in short, created art (below, photo: private). 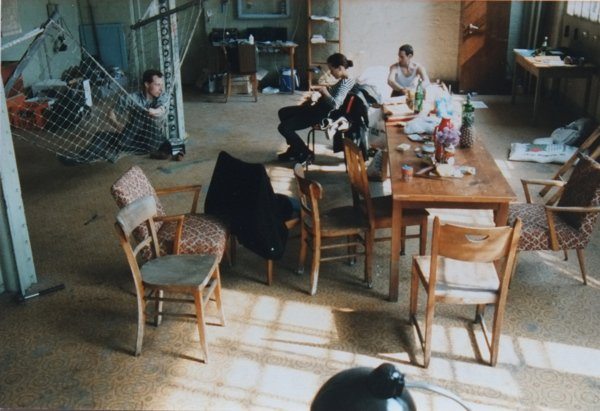 But let us go back to the beginning. Born in the south-western corner of West Germany in 1966, Manfred Mülhaupt completed an electrician’s apprenticeship before studying Fine Art in Freiburg. “In West German society, which was saturated in all aspects” he saw no challenges and also no freedom. “Everything had already been done, there was no need for anything else.”

While at the Städel art museum in Frankfurt am Main in 1994, he met Peter Bux, also an artist and son-in-law of Regina Lenk, who was manager of the Spinnerei at the time. She was the one who invited them to use space in the Spinnerei as studios. So, to Leipzig!

Or, as he puts it: “And here it was: a city as empty as I was. A city that still had space to spare and was looking for ideas. I felt at home here immediately. And in the middle of this vacuum was the Spinnerei, one of its lighthouses of emptiness and desertion. Gigantic, massive and full of possibilities.”

At the time, what is now Meisterzimmer #1 in the Spinnerei served as his studio and base from which to discover the city, its empty houses and factories. “You could wander around undisturbed for days, always coming back with something: impressions, images and finds from a past civilisation.”

He also sought and found friendships with new artists. He began to draw again, constructed his own revolving lamps and began to erect structures in the available rooms. Found pieces of furniture were upcycled, fittings installed and light introduced to every corner.

Landlords with passion, but no fixed intentions

He met his partner, the artist Jana Gunstheimer in 2005. She lived in Jena, but they spent their weekends together experimenting at the Spinnerei, producing early structures and artistic inventions.

For example, they began to make mobile beds on wheels, followed by the first large installations for their exhibitions. They found the materials for these in the huge abandoned sheds, on foraging missions just a stone’s throw away from their own kitchen sink. In the large, empty spaces and anterooms of the Spinnerei, Jana and a group of artist friends installed dystopian scenarios that often dealt with the history of East Germany and the hopelessness and lack of motivation they observed; these became an essential part of their body of work.

In 2008, after a few years of commuting, Jena was chosen as the place on which they would focus their lives. But what about Leipzig – about this space, one of the most beautiful on the whole of the Spinnerei site? Without really believing it was possible, they began to think about letting rooms, partly with the hope of being able to stay there themselves, too. 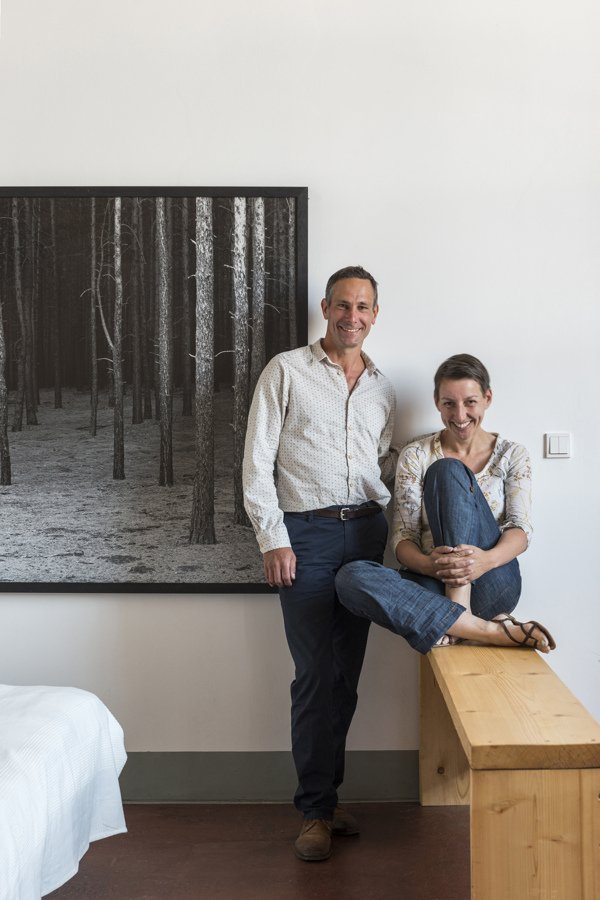 After 14 years of having to cycle down various corridors to reach the “smallest room”, Manfred Mülhaupt installed a toilet in the bathroom – but not until they had moved out. And against expectations, people began to come and stay. Unfortunately, this was often at times they really wanted to be there themselves.

So they decided to provide a second, third and fourth Meisterzimmer, since they had come to find they enjoyed both the building work and welcoming guests.

With their unique approach to individual, often self-made interior design, without kitchen islands or design classics, they have now created four completely distinctive studio apartments. They are characterised by unique fixtures and fittings, an industrial feel and contemporary art installations – with a different focus for each room.

Unique, individual and full of irony – the Meisterzimmer
Or: the art of artistically inspired interior design

All the fixtures and fittings now to be found in Meisterzimmer #1 are the product of sheer joy in building.

The host worked on the conversion himself – living, building and rebuilding on site, applying his distinctive mix of ambition and relaxed attitude to ensure that the project was allowed to take its time where needed. This room has grown over many years. It is where the history of the Spinnerei is at its most evident, with numerous original found items from the times when cotton was still spun on the site and the Meisterzimmer themselves were furnished with artificial leather seats.

Room #1 is also the most variable room in the truest sense of the word, and not only because of the moveable wheeled beds that dominate. It is also where substantial changes are made first, still ongoing today. A “garden hut”, which was constructed on the raised platform, has since been dismantled and exists only as the memory of a beautiful, but done and gone, installation idea. 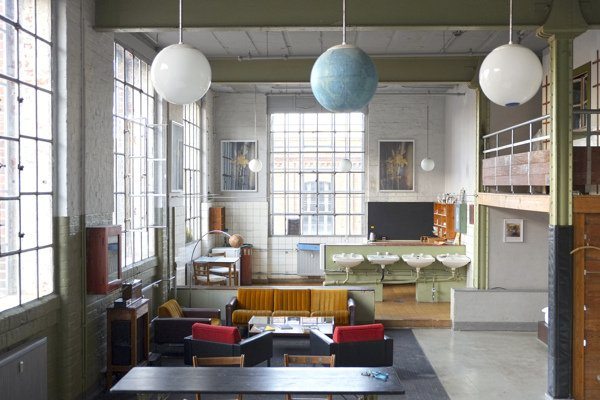 Meisterzimmer #1: offering accommodation for up to eight people. Photo above: Manfred Mülhaupt, below: Nick Putzmann 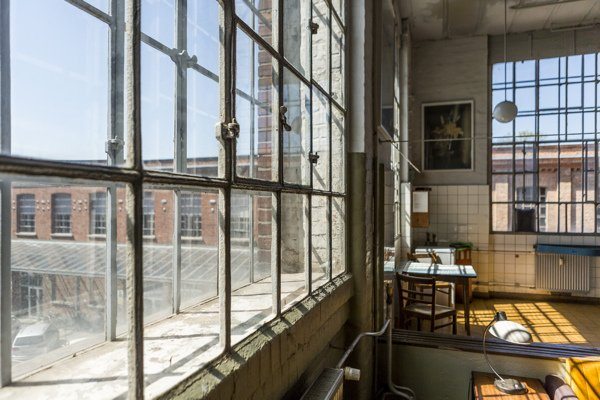 The design of Meisterzimmer #2 (2011), originally a rather austere room without much visible history, is strongly defined by its unusual dimensions: 16 x 4 metres. Planning the conversion during a trip to Venice, the room’s owners saw it as the body of a ship.

In the “stern”, the bathroom and kitchen are located like supply units. From the upper level above this, there is a view like that from a ship’s bridge, out over the whole of the “front deck”, where there is a table and array of seating as well as a work space. Here you can sit as though leaning on the front rail of a ship and gaze out at the wonderful view through the huge casement window. You could almost believe that beyond the panes is not the Spinnerei site, but the far ocean horizons. The actual window is mirrored by a painting by Jana Gunstheimer, which transports guests into a completely different landscape. 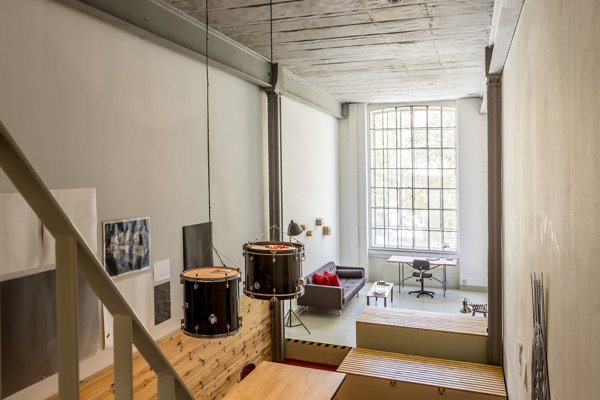 Meisterzimmer #2 – view from the gallery (above), desk and two windows (below). Photos: Nick Putzmann 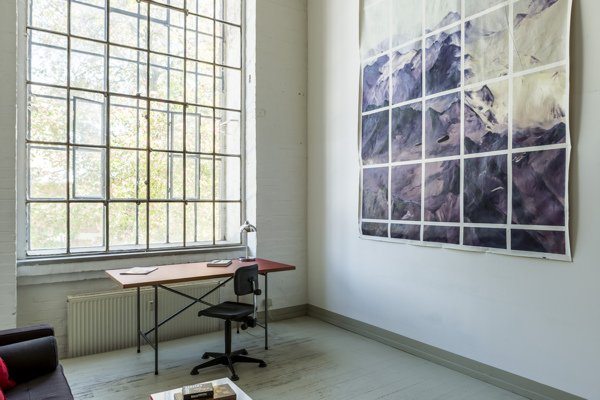 The artistic influence of the owners can be felt most strongly in the last two rooms. In Meisterzimmer #3 (2013), as in Meisterzimmer #4 (2014), art is not viewed as an afterthought to improve or decorate a finished room. Here, the installations formed part of the plan from the start, and the rooms were designed together with, and for, the art. In both of these Meisterzimmer, artworks by Jana Gunstheimer and friends of hers can be found. A neon work by Jana Gunstheimer in Meisterzimmer #3 proclaims “Thank God It’s Abstract”, an ironic comment on current trends in contemporary art – the more abstract, the better it sells. 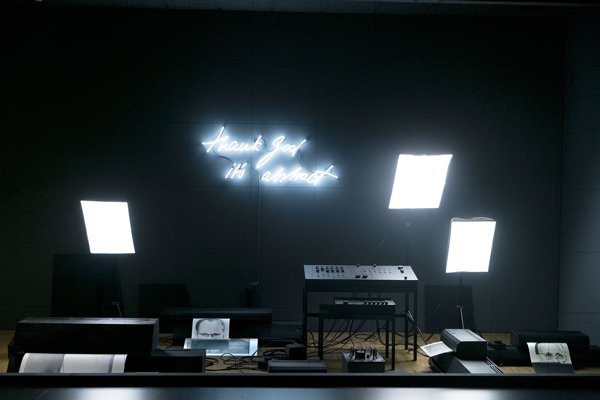 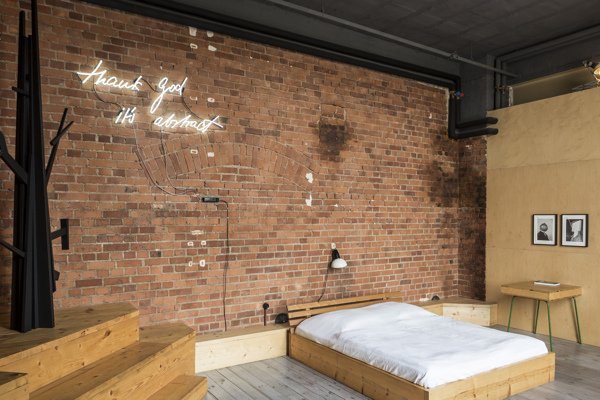 With its wonderful window seat, the room is designed like an outdoor space indoors. The brick walls with all wires and pipes visible could also be the external walls of a building, and the raised areas are arranged like stages in a public square. The room is visually divided by a solid box that houses the bathroom. 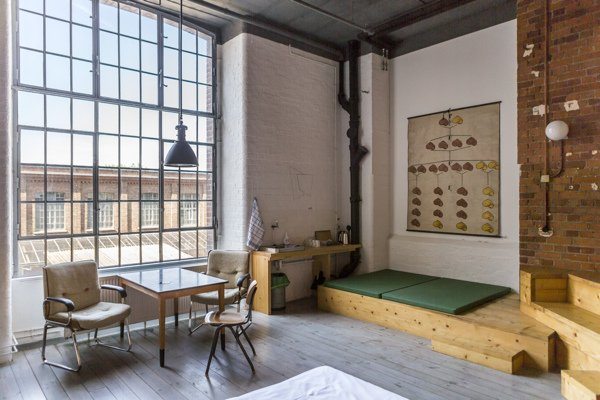 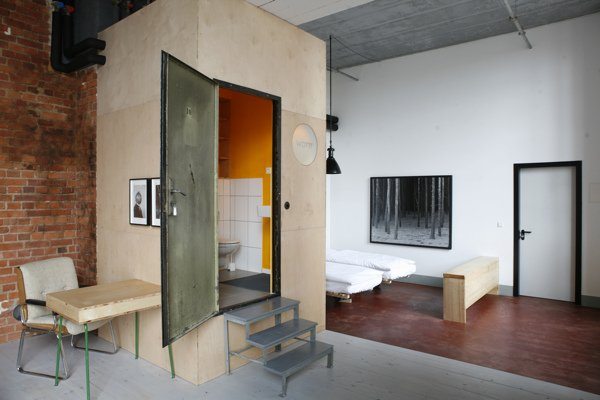 As a general feature, multipurpose raised platforms are distinguishing features of these most recently created rooms. They can be used either as stages or simply places to sit. They could even provide a space to display a sculpture.

On entering Meisterzimmer #4, your attention is immediately drawn by three objects. The observer may not at first know exactly what they are, but these are glass-fronted noticeboards, which were once used to keep workers at the Spinnerei informed of the latest news. Unusually, these backlit original finds do not have any hidden artistic meaning in themselves, but give the room a distinctive atmosphere at all times of day. 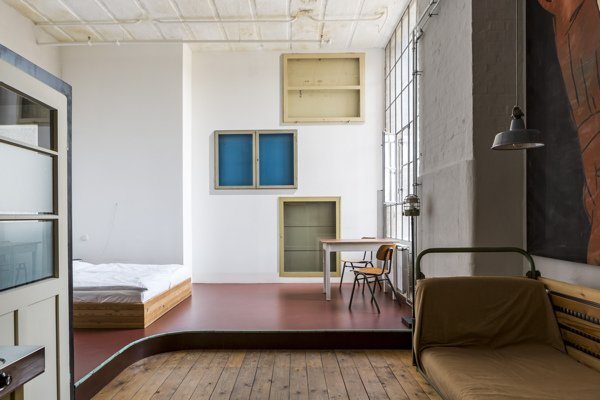 But there are some hidden meanings to be discovered: from the rear section of the room, guests catch sight – immediately or at some time during their stay – of a robust door above the bathroom compartment that looks like a safe. This mysterious piece is the work of Jana Gunstheimer and could represent the entrance to a parallel world. 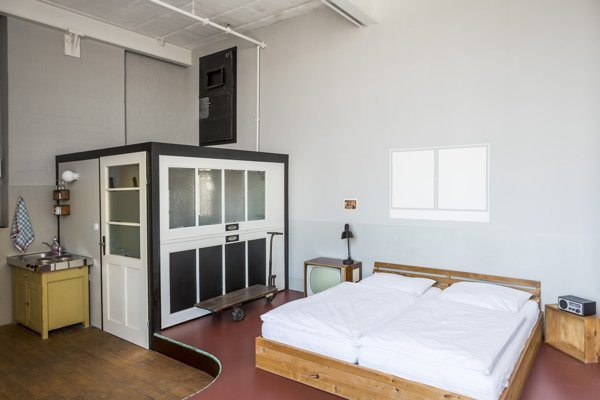 Thank God it’s art! So if you feel restless while staying in one or other of the Meisterzimmer, it must be your creative juices beginning to flow!

Manfred Mülhaupt still enjoys designing and building, including the creation of websites. And he currently has plans for a new project – still under wraps! – in an old fire station near Jena. Maybe you will be hearing more about him soon on urlaubsarchitektur.de.

Jana Gunstheimer is now Professor of Experimental Painting and Drawing at the Bauhaus University, Weimar. She has just been announced as the winner of the Falkenrot Prize 2018. An exhibition associated with this can be seen from 1 March at the Künstlerhaus Bethanien art gallery in Berlin.

One of Leipzig’s big crowd-pullers is the Book Fair (15.–18.3.2018), and the Spinnerei is one of the venues for the “Leipzig liest” [Leipzig reads] programme. The city itself also has plenty to offer.

If you are interested in reading more about the history of the Meisterzimmer, you will find a fascinating account by Manfred Mülhaupt here: Masters and Journey men – a little story