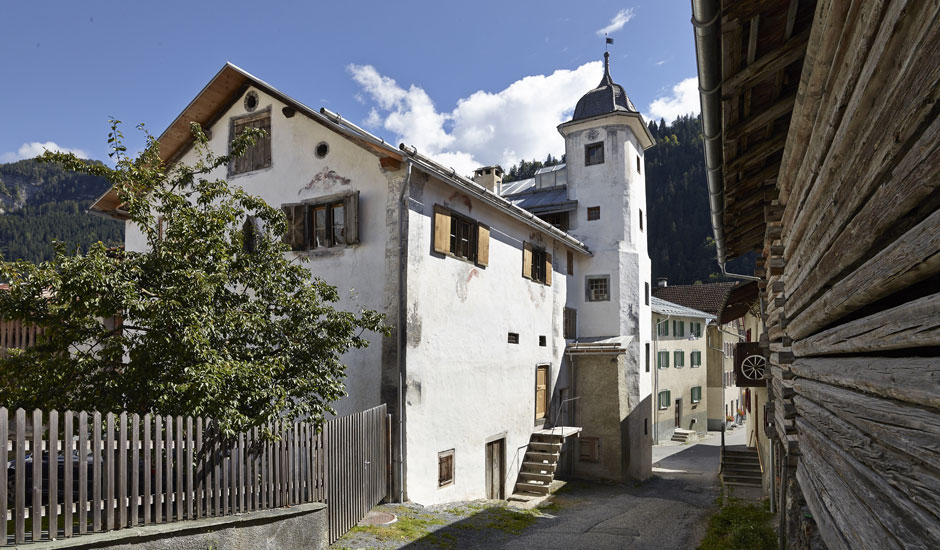 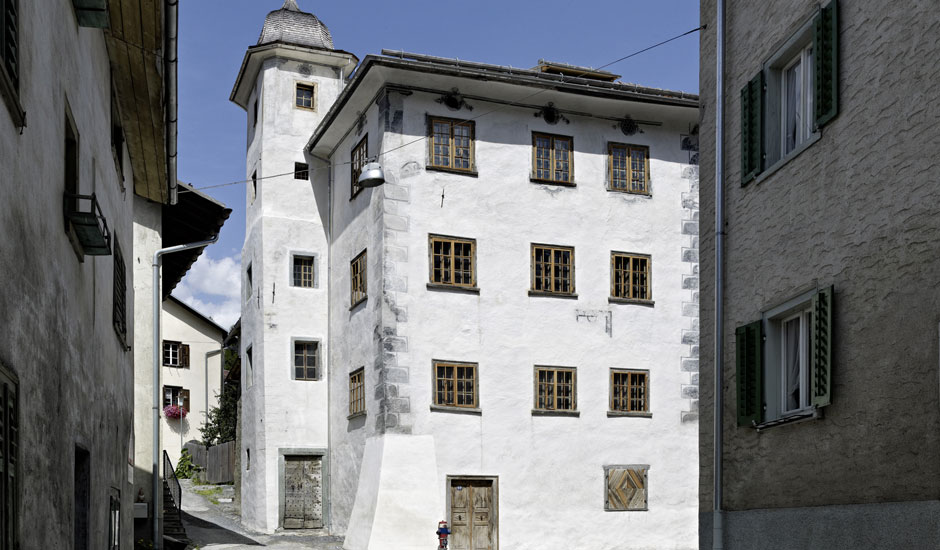 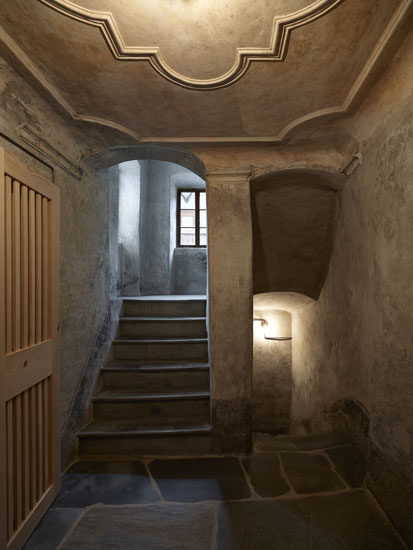 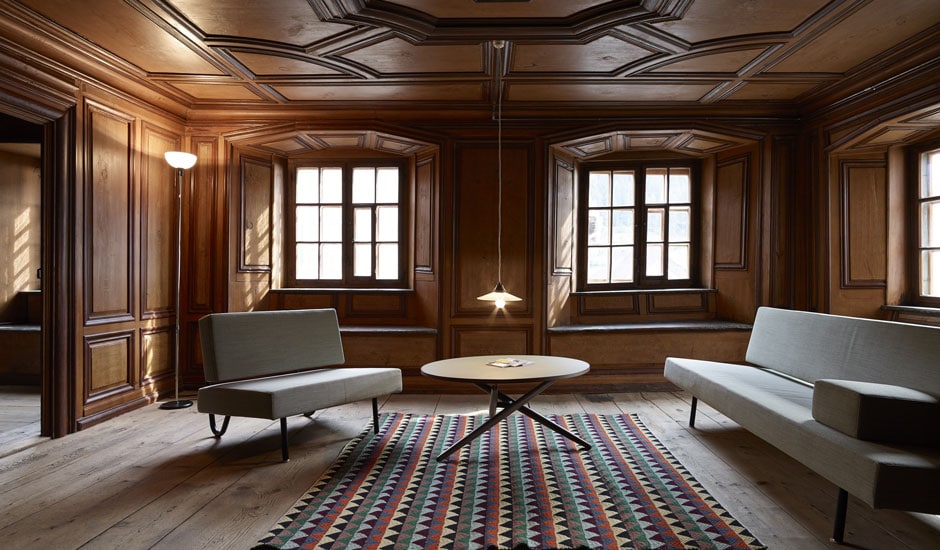 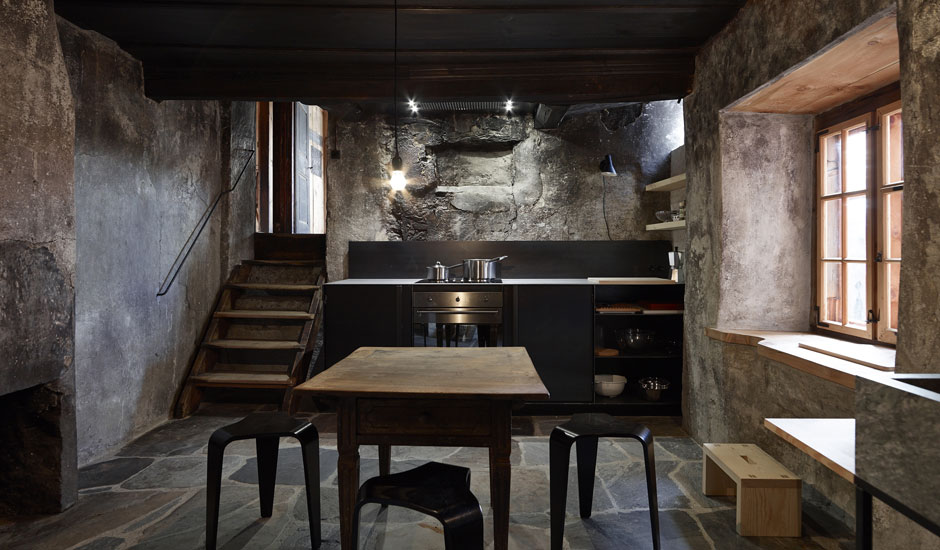 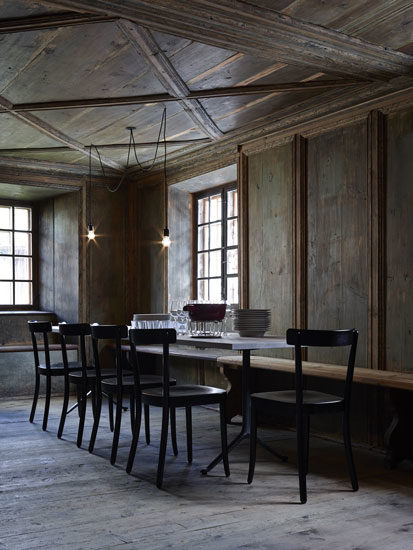 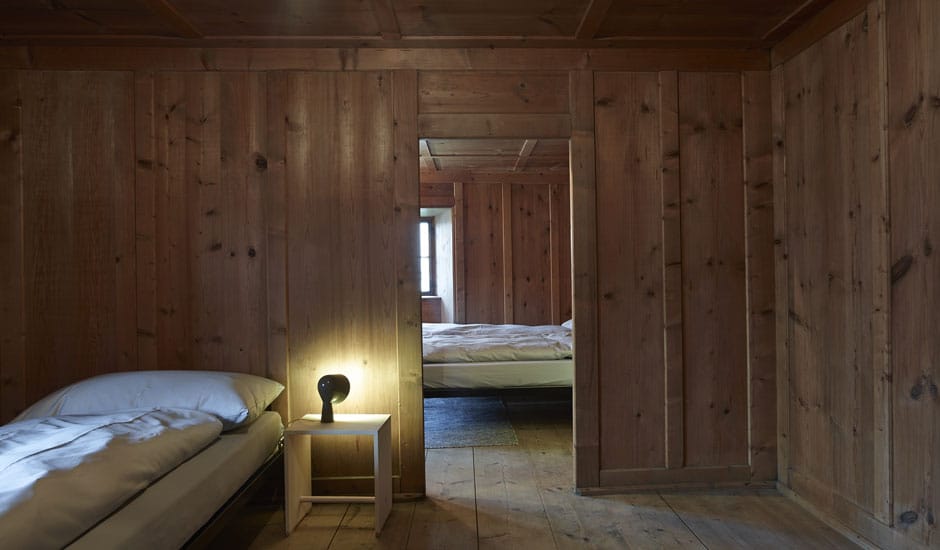 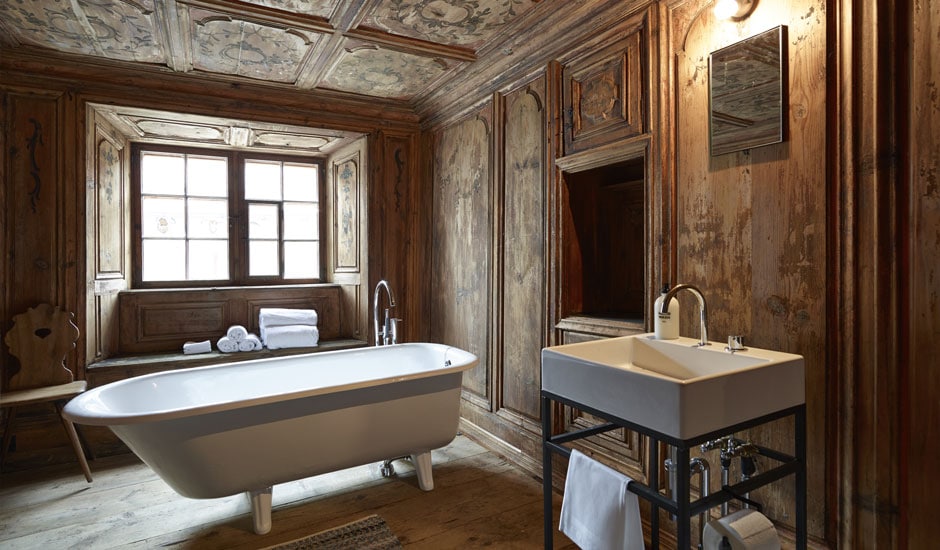 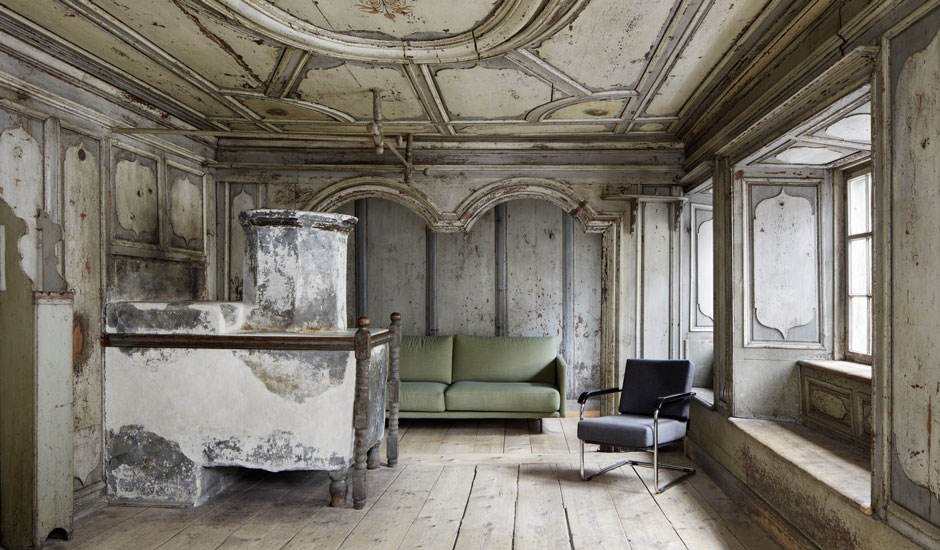 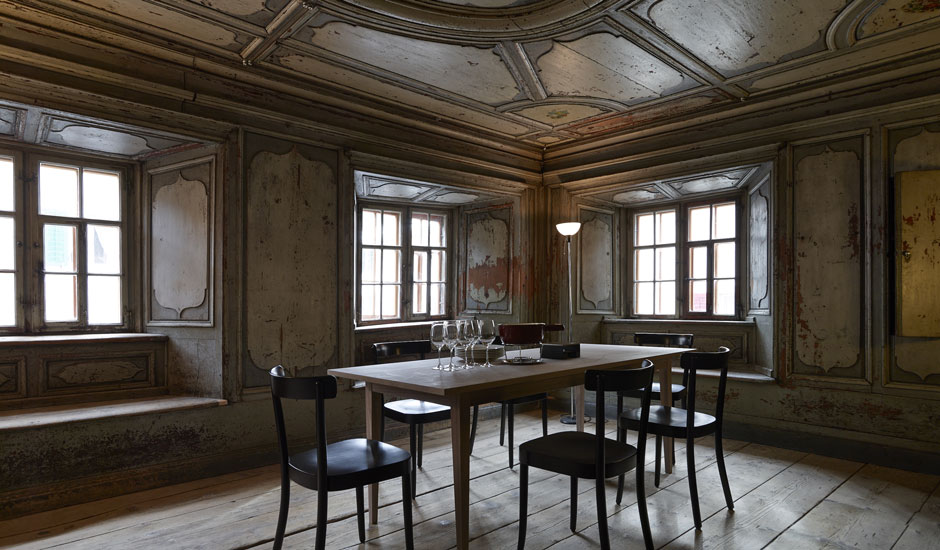 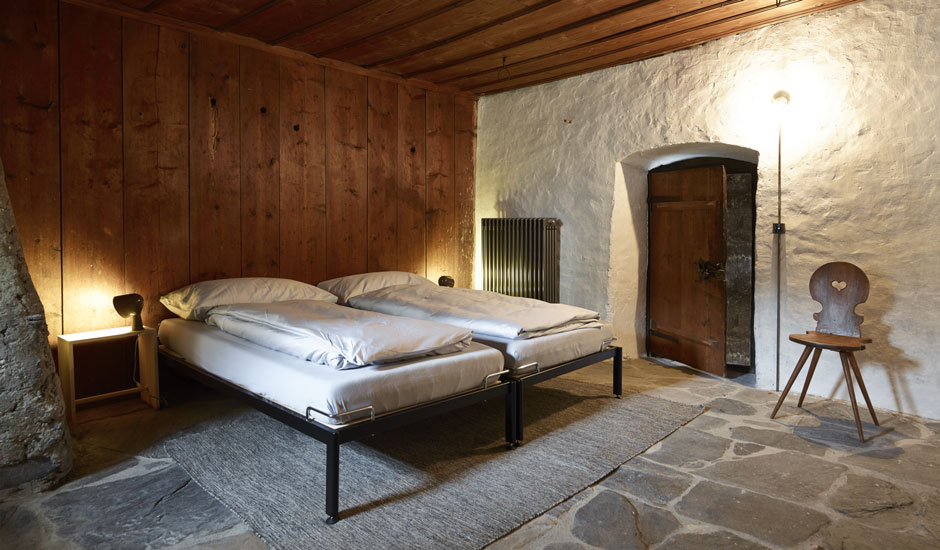 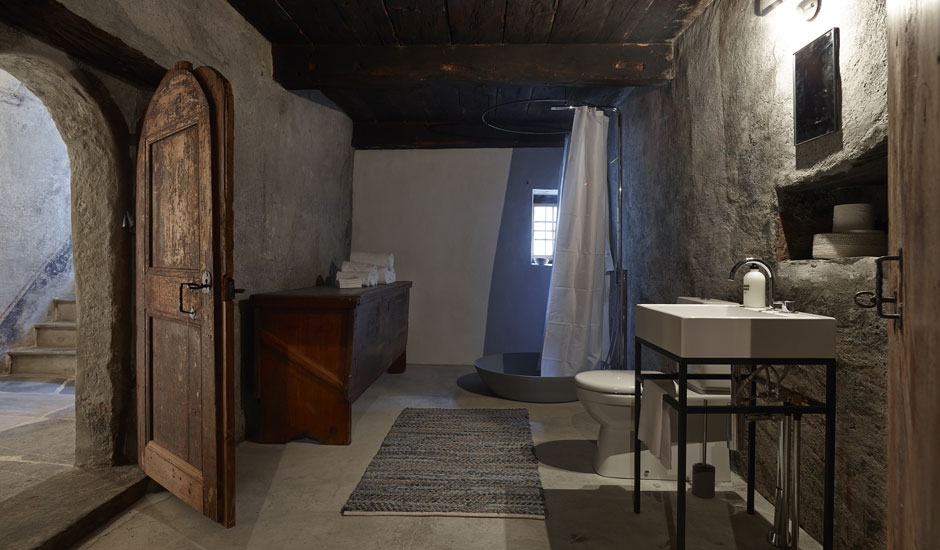 The Türalihus is part of a historic ensemble of buildings in the centre of Valendas, Switzerland. This small mountain village on the banks of the Rhine in the Safien Valley is known for its stately town houses. First built in 1485, the Türalihus has been extended multiple times over the centuries – with annexes, additional levels, and the stairwell from which the house derives its name. The house stood empty from 1941 until 2007, when the Swiss “Vacations in a Listed Building” Foundation acquired it from the son of the well-known Swiss architect Rudolf Olgiati and transformed it into the holiday home it is today.

Their approach was defined by a commitment to preserving and repairing the building’s historical fabric. The restoration was limited to altering only the bare essentials; traces of use and age were preserved and, as a result, the house evinces elements of several building eras. On the façade you can see fragments from five different periods that have appeared from under the 20th century plaster. Inside, the original character of the rooms has also been preserved. Stone steps, soot-blackened walls in the kitchens, historical fireplaces, splendid painted wood panelling in the parlours: everything breathes with a sense of history. The kitchens and bathrooms have been modernised and the designer furnishings include Swiss classics — which nonetheless blend in unobtrusively and harmoniously with the old architecture.

There are two holiday apartments in the house, which also can also be rented together. The smaller one for four people is on the first floor. The larger apartment for seven is on the second and third floors. The apartments are accessed via a common, open staircase.

Note:
No television, no WiFi.

Village tours and the Valendas development exhibition: www.valendasimpuls.ch. In the village square, you will find the largest wooden fountain in Europe. The Yellow House in Flims: this building, which has won several awards for its architecture, houses exhibitions on architecture, design and craftsmanship. Skiing in the nearby LAAX ski resort, snowshoe tours, winter hikes, swimming in the surrounding mountain lakes, many hiking trails and vantage points with a view of the Rhine Gorge, relaxing in the Terme Vals designed by Peter Zumthor.

Enjoy a holiday in a heritage listed building in which the traces of time can be read like an open book.

Vacations with families, friends, or in larger groups.

Scenery: In the village

Number of guests: 2 apartments for 4 and 7 guests