An old farmhouse in the Puster Valley in South Tyrol stands gracefully at the heart of a peaceful village, wearing its ultra-modern extension with dignified confidence. After a hiatus of fifteen years and a costly but careful conversion, the Niedermairhof is ready to welcome guests once more – just as it did in times gone by.

Every inch of this house has a story to tell of past centuries. Yet there’s nothing old-fashioned about the place: its young owners have let plenty of light, air and space into the Niedermairhof and have brought this historic structure right up to date with great sensitivity and an exquisite sense for what looks good. Profound respect for ancient and modern, coupled with daring room layouts have yielded marvellous results. Host Helmuth Mayr has sketched a journey through time. 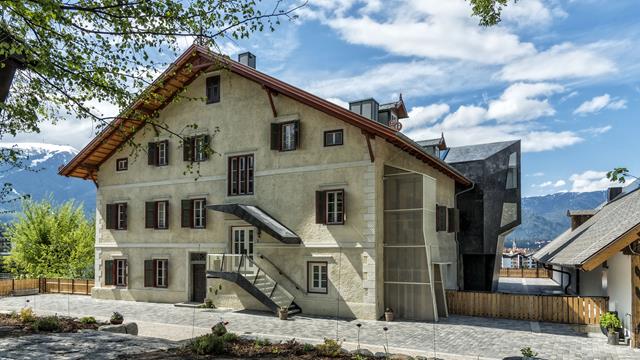 An idea. Much discussion. A sheet of paper. The start of something.

The story I have to tell begins in 1439, about 135 years after the first mention of the Niedermairhof. It starts with the words “Kristoffel ein elicher Sun des Vallentain zu Dietenhaym“ (Kristoffel, noble son of Valentine of Dietenheim) and concerns a contract signed by a magistrate. We still have the parchment in the house, along with many other things. 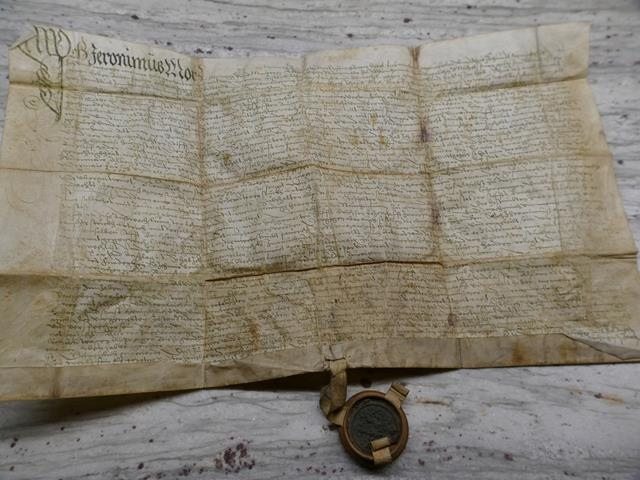 Almost six hundred years have passed since then. Many generations have kept the farm going, dowries paid, contracts of exchange concluded, coats of arms granted and land sold and inherited. Sometimes there were disputes over inheritance. Emperors (in this case Kaiser Rudolf or Leopold I) and archdukes were mentioned in documents.

Then we came along. Kathrin, the owner and builder; Helmuth, the writer of these lines. Emperors and kings only exist now on television and in the gossip magazines. We no longer write on parchment. Perhaps we think we have come a long way. Nevertheless, the house is still the same old house. What is the Niedermairhof to us and how can we make our own contribution to its story?

Lots of ideas. Lots of possibilities. Lots of discussions. As paper doesn’t cost quite as much as it did in olden times, we used a great deal of it. Fresh start followed fresh start, and draft followed draft. Months passed. Looking out over the whole of the property, we found it very difficult to find answers to the questions we’d been asking ourselves. So we tried, step by step, to piece things together.

We felt the need to start with the main house. A building that was repeatedly extended over the centuries and its function adapted to circumstances. On old church banners, you can still see it depicted as a two-storey, smaller house. It was extended, sideways then upwards. Farmhouse. Inn. Guest rooms (yes, they called them that even then). A youth hostel. The building also served as a school room one year. Riotous fire brigade balls were held here, which the oldest inhabitants of the village still remember with a smile. 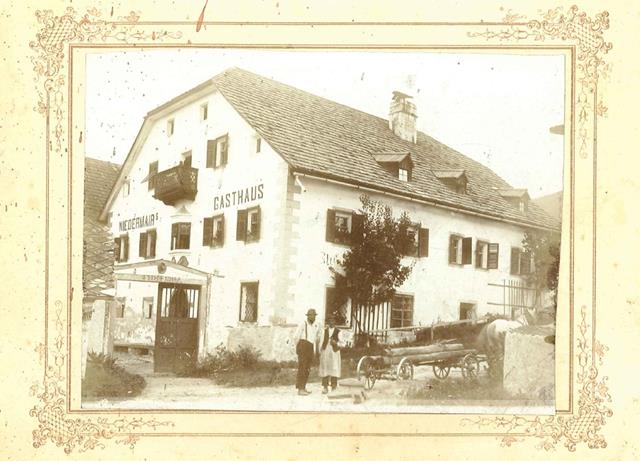 We can still do all of that, we thought. We opted for guest rooms. We hoped interesting visitors would come to us in the summer holidays, just as charming gentlemen and beautiful ladies from the Austro-Hungarian monarchy did in the late 19th century. Writing witty rhymes in the visitors’ book. Filling the house with life.

After two years of building, we declared that “the house lives”. House and guest book. There were many questions and decisions that would demand our attention later. Decisions that had no right or wrong, no good or bad. Many things emerged from the building process itself. With tradespeople and local craftspeople. During evening discussions. We discovered that one or two elements played through everything like a leitmotif, almost unnoticed.

• What was old and worth keeping remains

We have suffered for this doctrine. The old collar-beam roof now required support in the form of an iron structure. Old floorboards were carefully removed; the parquet flooring, Saturday after Saturday, piece by piece, was taken up. Stuck to the underside, we found the delivery note of the imperial and royal railway line. The old tiled stoves were also reinstalled. We fiddled around a bit with them and they now give us heating and hot water. Stoking up the stoves with wood was, and still is, too much like hard work. So somewhat newer technology was needed in the mix.
Together with a conservator, we checked point by point where preservable wall paintings came to light and exposed them. The old beds, vanity units, cupboards, chairs and tables were taken to a furniture restorer. Every day we were faced with new decisions. Was it worthy of preservation? Could we bring this into a new context? Exciting thoughts. 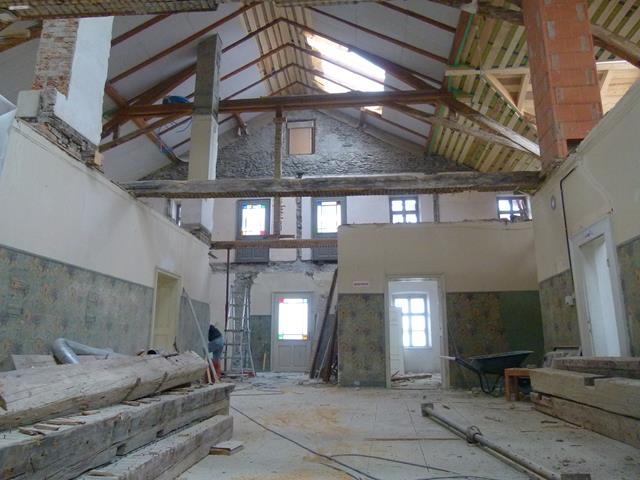 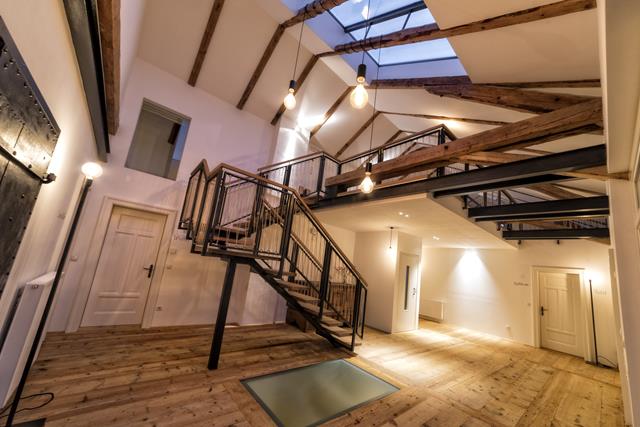 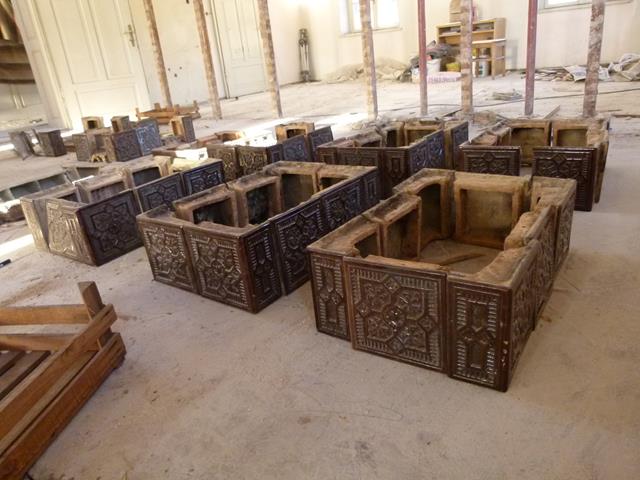 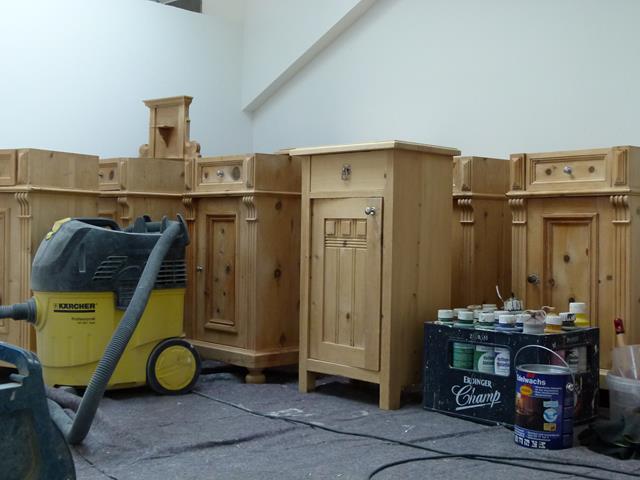 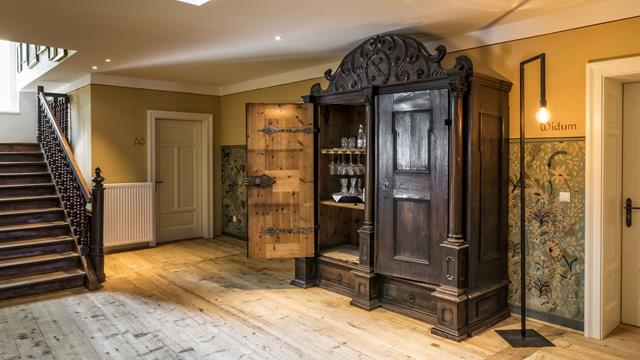 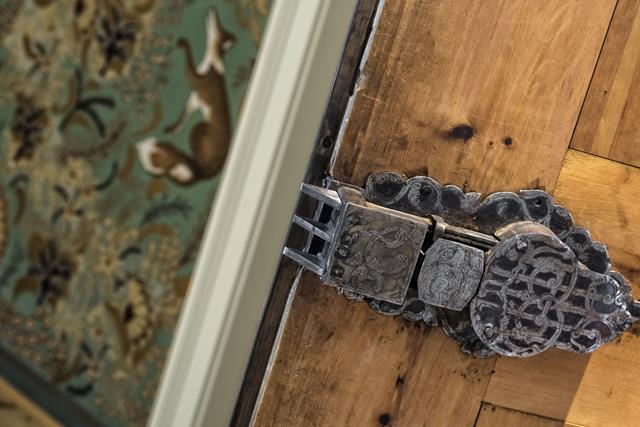 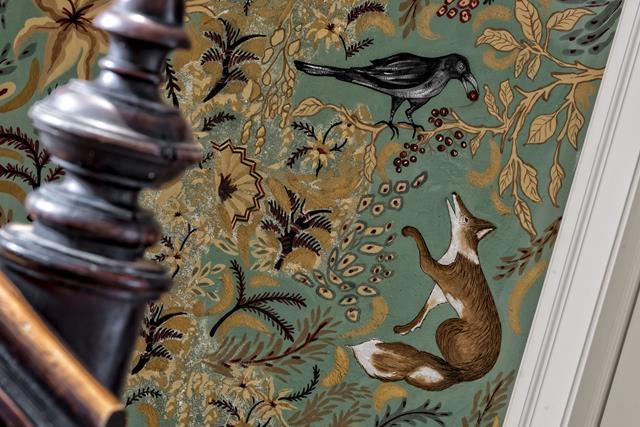 • The outer façade should retain its former grace

Just how interesting this building is became apparent at the very start of the building works. The roof came first. It had been raining in for quite some time. The roof alone could have an entire story dedicated to it. It is beautiful and at the same time crazy in shape. In the evenings, we drew the shapes from the weathered remains of acroteria (ornaments) onto the wide plastic flooring. We found 60 cm-wide larch boards so that the acroteria could be cut from a single piece. We thought up visual tricks so that the roof would still retain its narrow appearance. We negotiated with carpenters and plumbers over every centimetre of wall structure for the roof dormers. Where do you see 10 cm dormer wall structures? All for the sake of the proportions.
For the windows we sought out the window fitters with the thinnest profile. The colours of the building, shutters and roof were discussed and agreed with the conservator – and so on. As I said, the roof has a story to tell all its own.
With hindsight, I can look back and smile about it all. 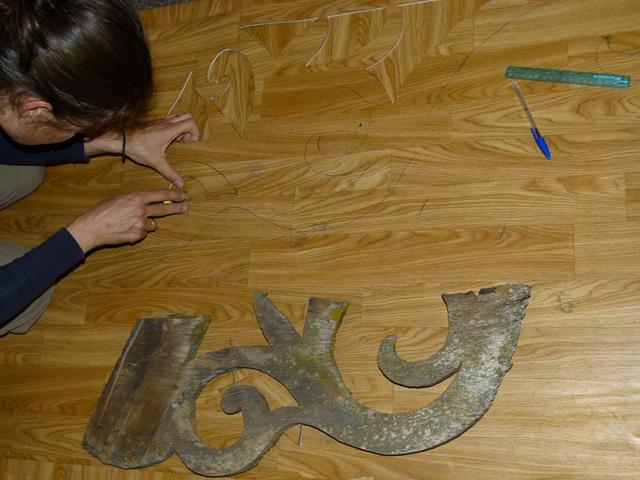 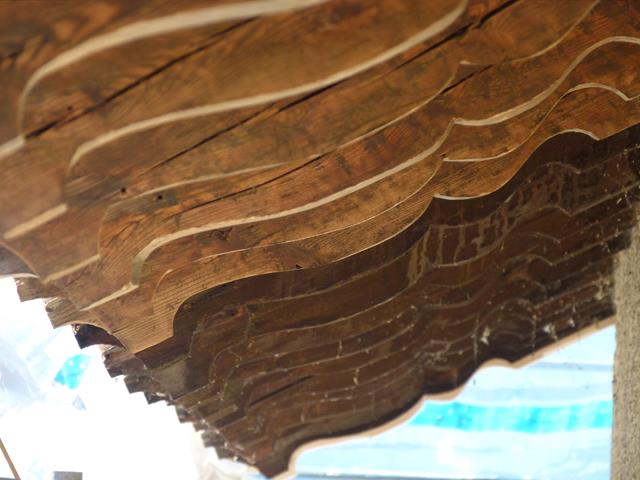 • Be bold and innovate

Where we had to remodel, we didn’t waste any time. We came into our own, thinking up daring designs with architect Andreas Vallazza. From the first drafts to the property we eventually created it was a very long journey, and everyone put their own stamp on the plans.
That’s another subject I should touch upon, a subject I have undervalued. Not just that everyone has their own character. It is wonderful to see how men and women live and experience architecture and design differently. During the building period which lasted almost two years, we had the privilege of working with wonderful artists, designers and creatives of both sexes.
Ideas, dreams, practical considerations and great respect for the project as a whole generated something completely new. Our own century too has given rise to some fabulous materials, colours and techniques. We’ve been in it for more than 16 years now, after all. Time in which to gain a foothold on the century. 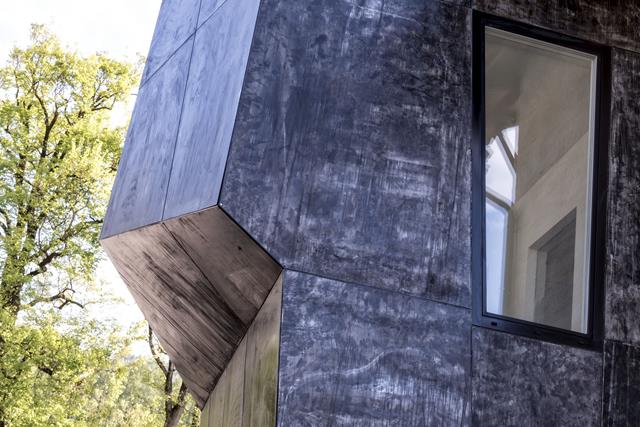 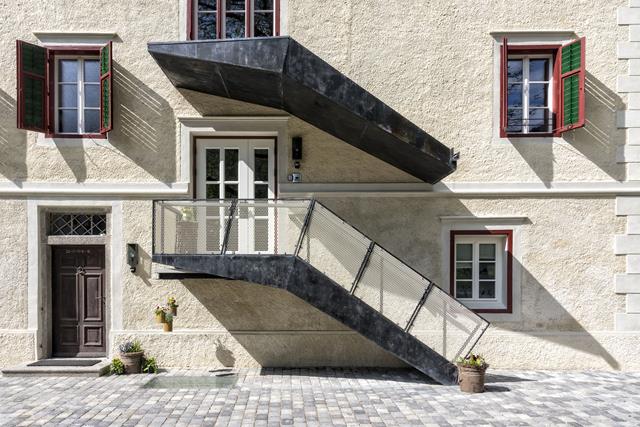 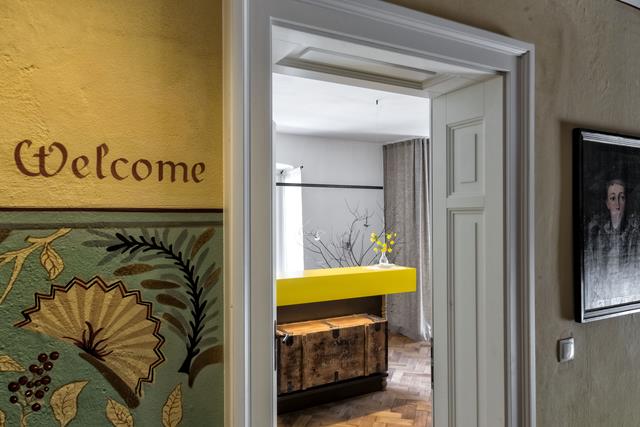 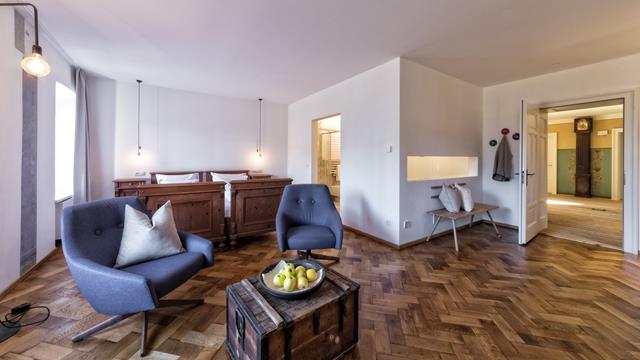 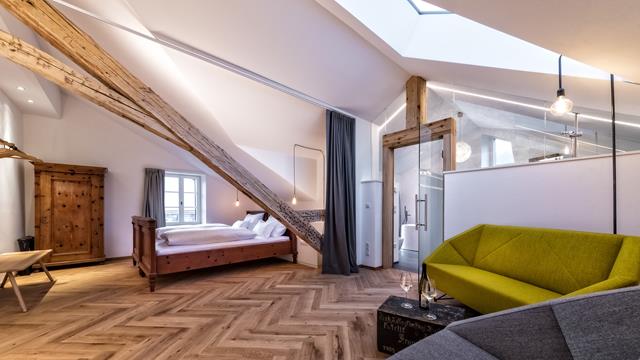 Speaking of feet, people love hearing their own floorboards creaking, but the neighbours definitely don’t. There are other things too that should go unheard. That is why it was important that we treated the subject of acoustics with particular attention to detail. An old house doesn’t have to have wafer-thin walls. With a few tricks and some bold innovative measures once again, we managed to reduce footfall and airborne sound considerably. So now our skirting boards have parted company with the floor. The conversations and dance groups have also parted company with the next door room. In a very old house.

Oh yes. Nobody got injured. We are still a couple, and we are very happy in the house. We hope that we have brought the house gracefully into this century. A house which has been passed down from generation to generation over hundreds of years; and we are still doing new things. We are thinking about building a children’s play house and also how we can develop the design of the garden. Talking about it is a real delight. We think we are very fortunate.

An idea. Much discussion. A sheet of paper. The start of something. 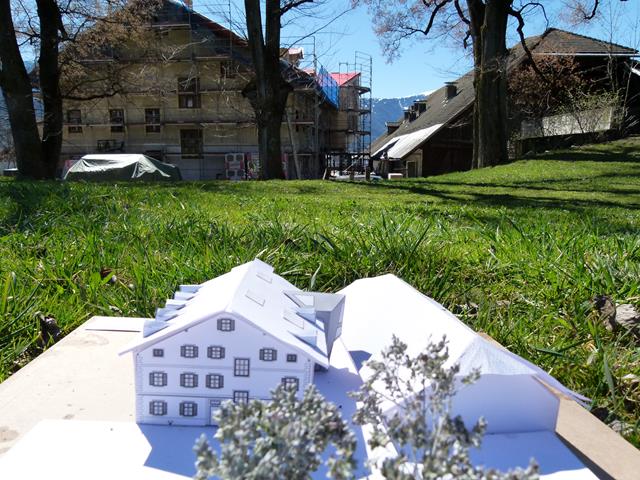