Aurora aeterna – the Seehotel am Neuklostersee

Once a farm, and from 1975 a guest house for citizens of former East Germany, the Seehotel am Neuklostersee near Wismar has been welcoming a wide range of guests from near and far for two-and-a-half decades.
Now comprising two buildings – the Steinhaus, a 20th century brick-built house, and the reed thatched, lovingly restored Kunstscheune from the 19th century – the property represents an adventure begun in 1991 by Nalbach + Nalbach Architekten that has taken them into uncharted, fascinating waters. 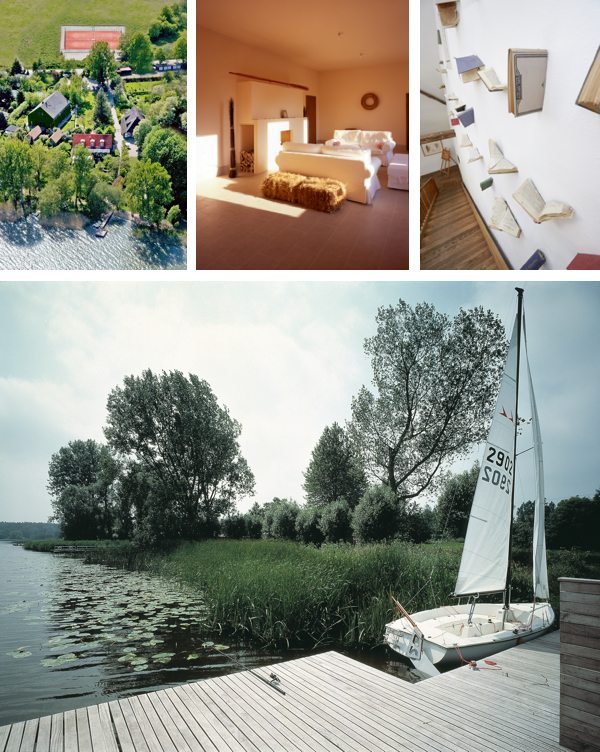 How it all began – planned chance

Johanne Nalbach has always loved water and farm buildings. Originally from Austria, when she arrived in Berlin in 1972, this successful architect would certainly never have dreamt that she would end up by the Neuklostersee lakeside in Mecklenburg-Vorpommern running a regular hotel business.

Her husband Gernot, also an architect, moved to Berlin in 1972 to take up a professorship. It was in Berlin, in 1980, that the architects’ practice Nalbach + Nalbach was founded. They went on to design a lot of successful hotels – but always for clients. That is, until 1991, when Johanne discovered the property that was to become the current hotel and fell in love with the lake, the farmhouses and the wonderful landscape.

The village of Nakenstorf am Neuklostersee, where today’s lakeside hotel is located, was a major centre in the area around Wismar until the Thirty Years’ War. All but destroyed in the war, all that was left of the village was six farmhouses, among them the “Birkenhof”. It continued as a farm until well into the 20th century, before its transformation into the Morgenröte holiday centre for agricultural workers in 1975. After the reunification of Germany, the property was put on the market and Johanne Nalbach, who read about it in the press, was simply unable to resist it. Her own farmhouse at last – a retreat where the whole family could escape Berlin at weekends.

From a weekend holiday home to a hotel

When the architects viewed the property, two things quickly became clear: firstly, that it would mean a lot of work. The buildings had plenty of traces of Communist East Germany; the land was crisscrossed with concrete tracks and covered with numerous lodges. But the basic structure and ancient tree coverage enabled Johanna Nalbach to visualise what lay at the heart of the complex, and what it could again become. A second problem also soon made itself known, namely that the property was much too big for a simple weekend retreat. It was therefore fortunate that the couple who had run the former holiday centre were still living in the vicinity. And so the architects made the unexpected, spontaneous decision to venture into the hotel business and invite guests to come and share in the magic of this place.

That was how they and their family, led by Johanne Nalbach, set out on a great adventure with no idea where it would lead them, let alone whether there would be the slightest return on their investment. The Seehotel was only made possible, both in principle and in reality, by state funding. During the two-year renovation period prior to the opening in 1993, the first building to be given the full treatment was what is now known as the Kunstscheune. In 1991/92, the complete timber frame and roof trusses of the barn were replaced, followed by the clean-up and renovation of the interior. A new gallery level was installed, which now houses a large maisonette suite. The renovated Kunstscheune is dominated by the large, open, two-storey main living room with a Steinway grand piano and excellent acoustics, which has been discovered by, among others, the Mecklenburg-Vorpommern festival who stage their twice-yearly “Young Elite” series of concerts there.

The space is also used year-round for plays, lectures, concerts and parties. Chef Alexander Stoye and his team, who in 2018 were awarded a Bib Gourmand for the second time in succession, also hold a “Chef´s Table” here several times a year. 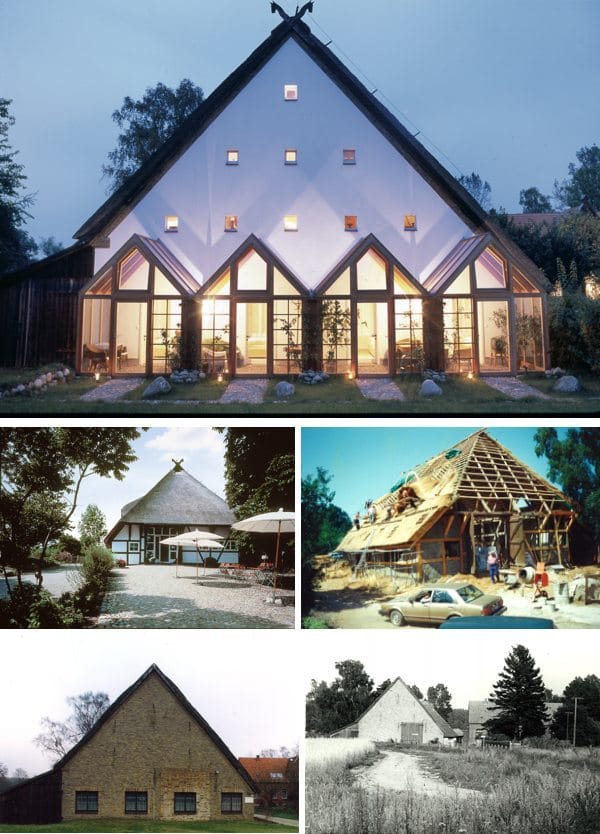 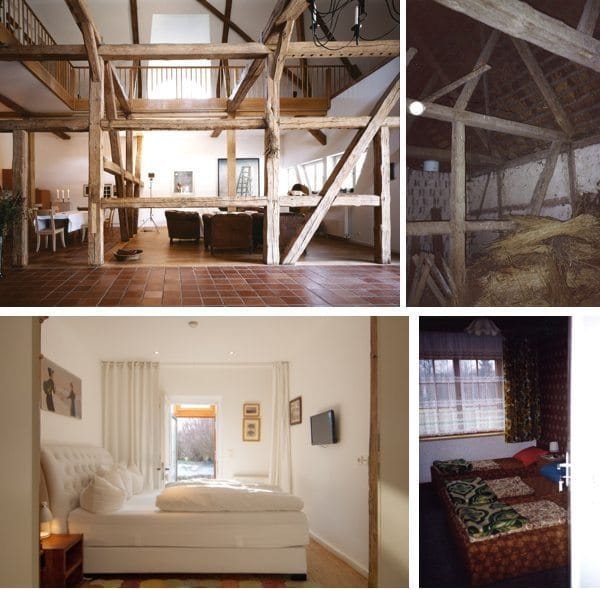 Pictures: interior views of the Kunstscheune past and present

The adjacent shed was converted into the Gänsebar in 2008, and since then offers not only a meeting place where people can come and enjoy top-quality drinks and selected tobacco products, but also a poignant reminder of the farm geese for which it is named, that had to be housed here during the bird flu epidemic. The subtle references to goose-related folklore and the display case containing a goose, fox and hawk are a bridge between past and present, between the interior and the natural cycles of the surrounding countryside. 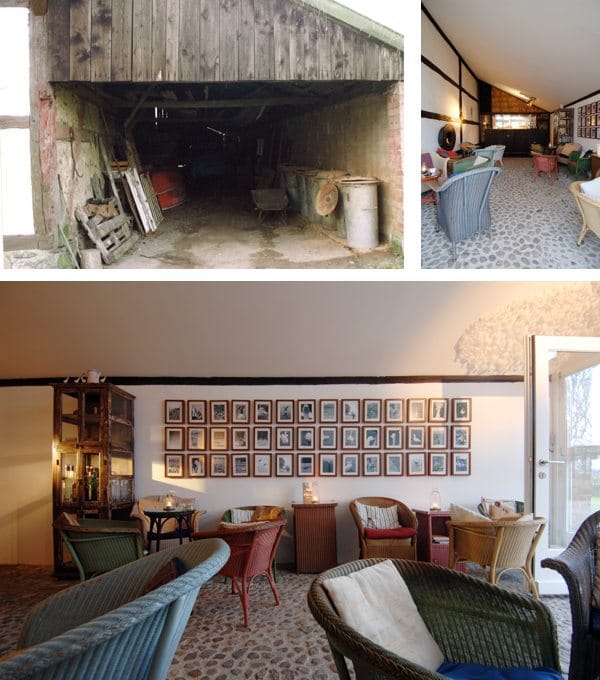 Substantial renovations were also carried out in the Steinhaus. Its accommodation was converted from the previous seven rooms to six modern bedrooms, with the former dining room converted into a contemporary award-winning restaurant. In 2003 a steel and glass conservatory was added, giving both diners and kitchen staff a window on the natural world and providing the culinary experience with a backdrop of wonderful views. 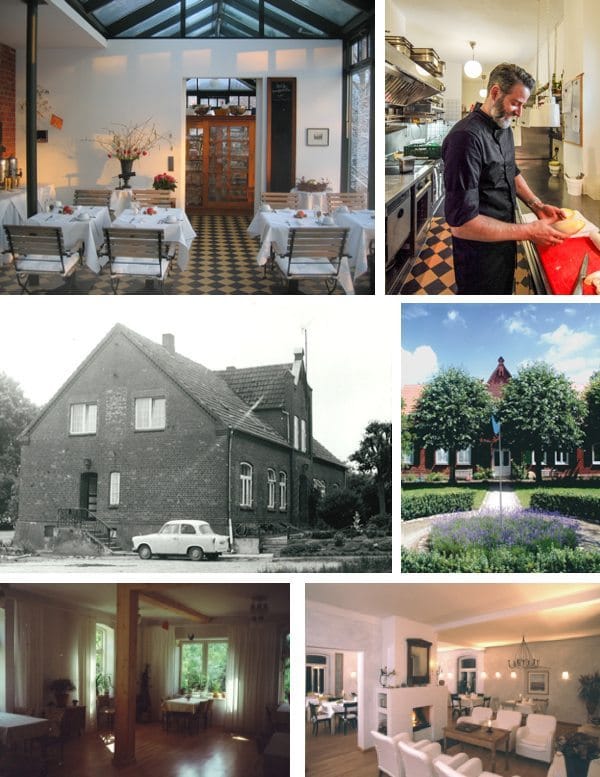 Steinhaus – the restaurant and its chef, with interior and exterior views from past and present

Dialogue between old and new

The location of the old East Germany-era lodges became the site of a new building, the Badescheune, in 2004. This building is in dialogue with the Kunstscheune which it faces, the latter’s historic half-timbered elements mirrored in the horizontal weathering-steel beams. Essential and fundamental to the conversion are the use of local materials such as larch and ivy for the exterior, built-in furniture of oak, cherry and walnut, and the interplay of the four vital elements.

Swimming here, you look out over the beeches or the fire in the hearth at the end of the swimming pool, moving to the adjacent spa to relax and unwind afterwards. The upper floor of the building currently houses eleven maisonette suites with living areas and gallery bedrooms. Each suite has a flower-related theme – with displays of poppies, roses and dahlias showing the way in the corridor. 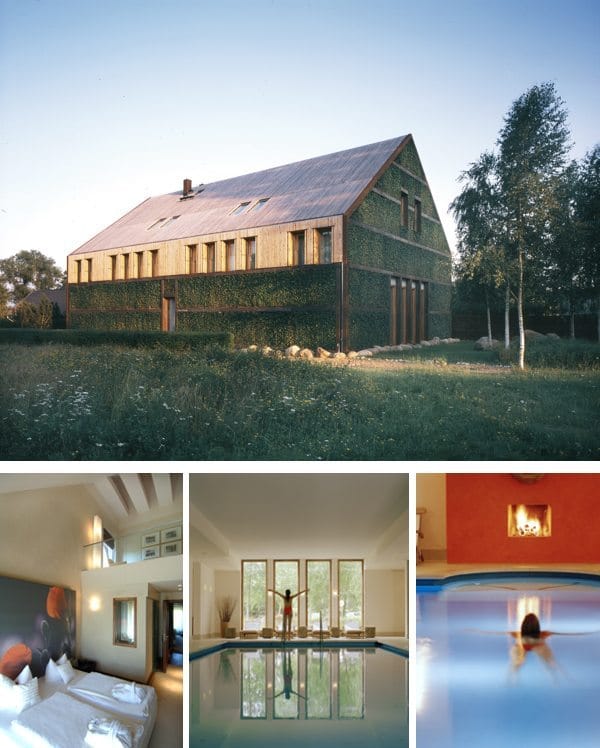 In 2010, as “offspring” of the Badescheune, the wellness suite was installed in the basement of an adjacent former lodge, also built of larch wood. Guests can come here for pampering with cosmetic treatments and massages.

Three of the eleven former lodges on the site have been retained and completely renovated. Enclosed by hedges, the holiday lodges blend wonderfully into the overall complex, with glimpses of views and access paths skilfully integrated to ensure that they are both private yet very much a part of the landscape. 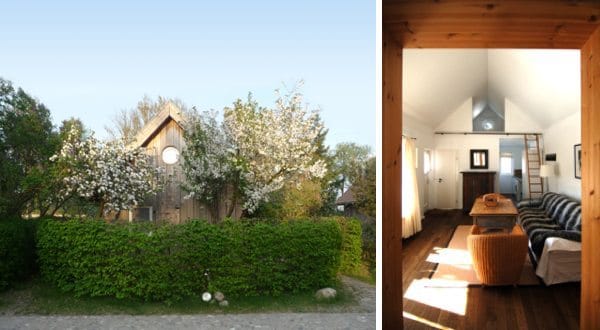 The whole site is a veritable paradise for children, offering plenty of space, hidden corners to explore, and opportunities for activity. The Nalbachs have had two special ideas to make the place a truly unique experience for children.

In 2010, Gernot Nalbach converted a former transformer building into a “kids’ hotel”, where children big and small can discover the world. A listening device amplifies bird calls, a wind turbine illuminates a bicycle light, a camera obscura gives views of the world upside-down, and cushions stuffed with sheep’s wool under the roof of the tower are a cosy place for daydreaming while little music boxes play works by Mozart, Beethoven and Strauss. The outer walls of the tower are hung with boxes to attract butterflies, cockchafers, wild bees and bats. There is a swing where little ones can ride high over trees and water, and there is a sand pit to play in. The more adventurous can even spend the night here, but only if accompanied by an adult.

There is another hideaway especially for children, the “birds’ nest”. Here, youngsters can whisper to one another and share secrets undisturbed, forging plans, dreaming or using the place as a hide to look out over the surroundings and observe all that people and wildlife are doing. It is sure to make adults wish they could be children again! 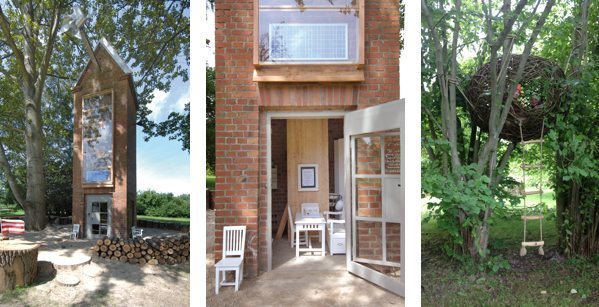 As the Seehotel was a farm for a long time, there are still animals living here: the cats and the sheep, Pflaume and Zwetschke, are sure to cross your path at some stage during your stay.

The geese fell prey at various times to the fox and the bird flu epidemics, but they are given a fitting memorial in the “Gänsebar” and their memory lives on. This is just one example of the great attention paid to details here, and the conscious way they are used.

In line with this way of thinking, Johanne Nalbach is not currently considering any further building works. Working on the details with feeling and love is an ongoing, fulfilling task. It is important for her and her family to have regular personal involvement with the hotel, despite all the demands on them in Berlin.

How can they add even more fine touches to the property? What would guests like to see? Or, to follow her own instincts: how could I feel more at home here and what can I do to make it happen? It soon becomes apparent that there is still no “business as usual”, even after 25 years. 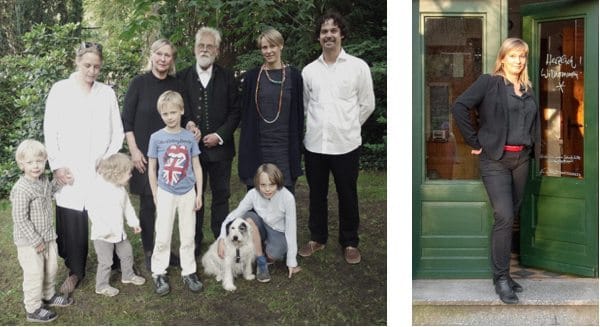 At some stage in future their son, Moritz, will be handed the reins of the company and lead this paradise into the future. A qualified culture and tourism manager, he will be taking over a mature development, and can also rely on the skills of hotel manager Manuela Hampe and her experienced team. A difficult inheritance? On the contrary: a wonderful challenge.

As I planned my visit to the Seehotel, a long weekend soon grew into a full week’s stay, even though I still hadn’t familiarised myself with the attractions the region has to offer. Before I had begun to research Schwerin, whose delights include one of the largest Duchamp collections in the world, Wismar, Rostock, Heiligendamm, Güstrow and other places along the nearby “European Route of Brick Gothic”, I already sensed that the facets of the hotel, grounds and surroundings were simply too many and varied for a short stay.

Believing that what really matters is the individual moment and the surprises it brings, I decided simply to arrive and see what awaited me there, to allow the Seehotel to work its magic on me. And then, time for chilling! After all, as STERN so aptly put it in 2006: “What makes this place special are touches that would usually be considered minor details. The place lives, it breathes, with something beautiful to discover at every turn.”

An overview of the “complete cosmos” of the hotel can also be found here.

The Kavaliershaus Schloss Blücher, 100 km to the south and also run by Nalbach + Nalbach Architects, is also well worth a visit. This Classicist manor house on the Finckener lake, with its rich history that includes previous use as a village school, has also been extensively renovated to form a small hotel, and since 2010 has been offering individual accommodation in a room and eleven suites.