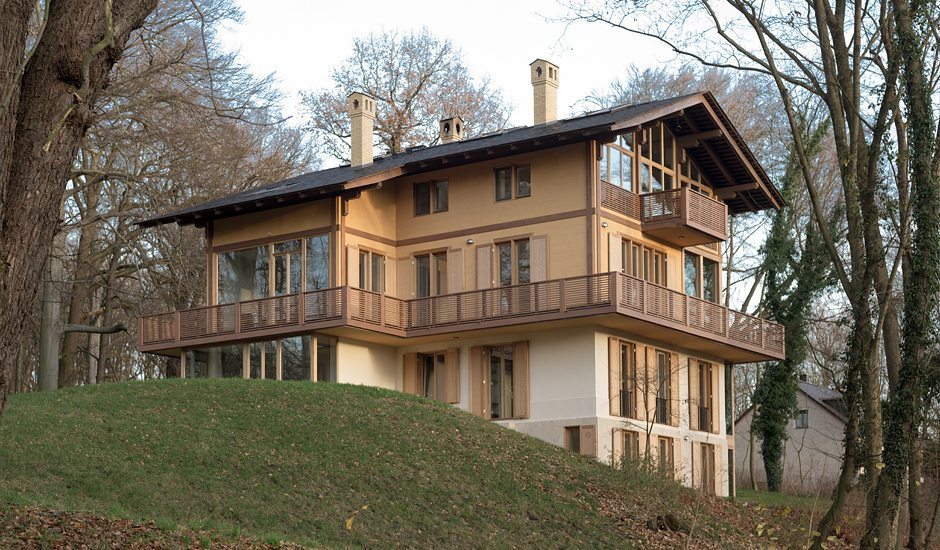 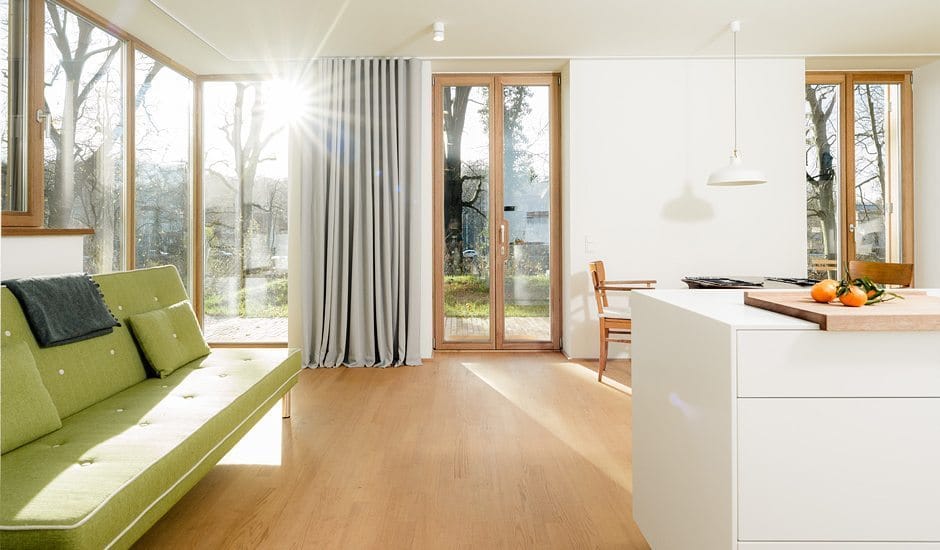 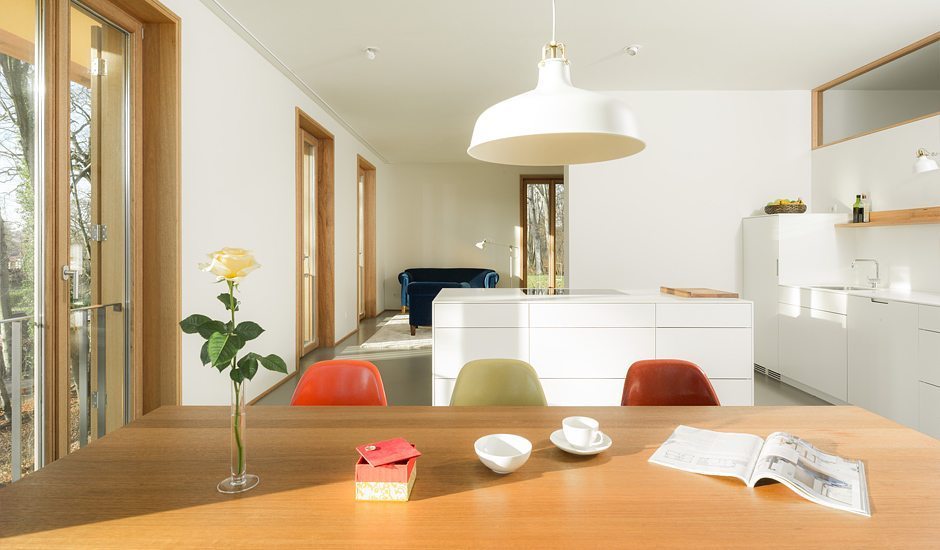 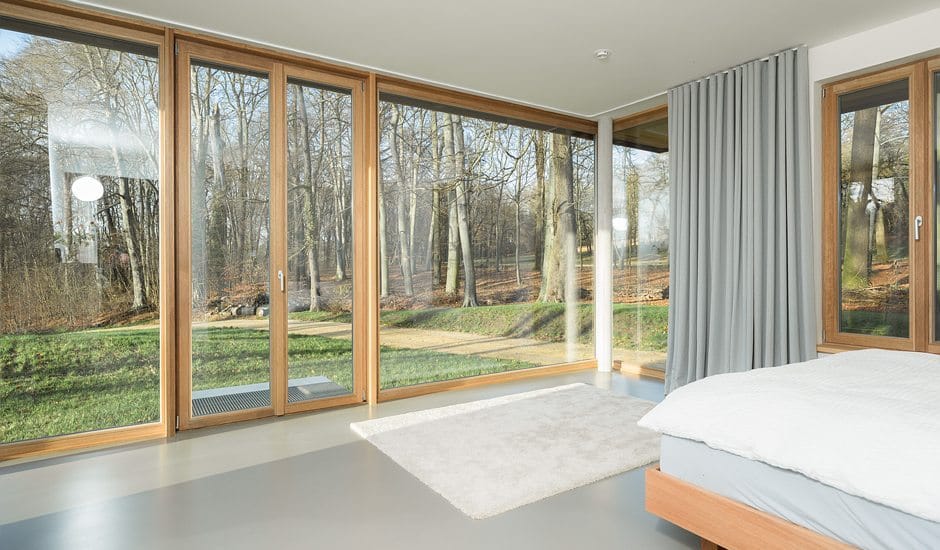 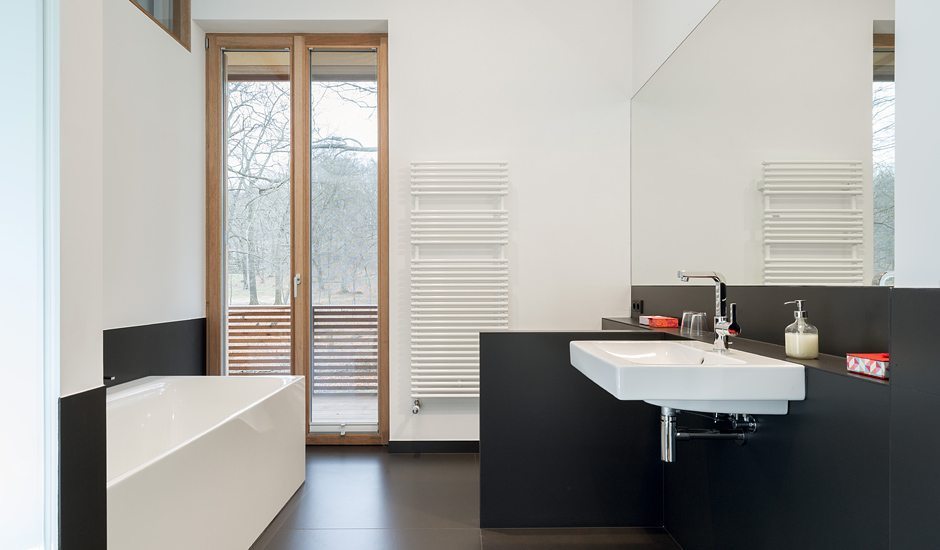 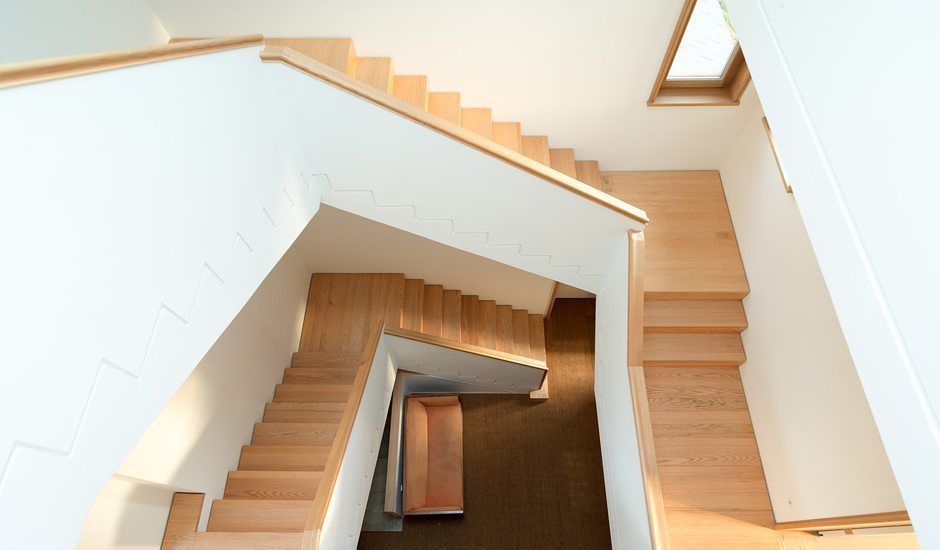 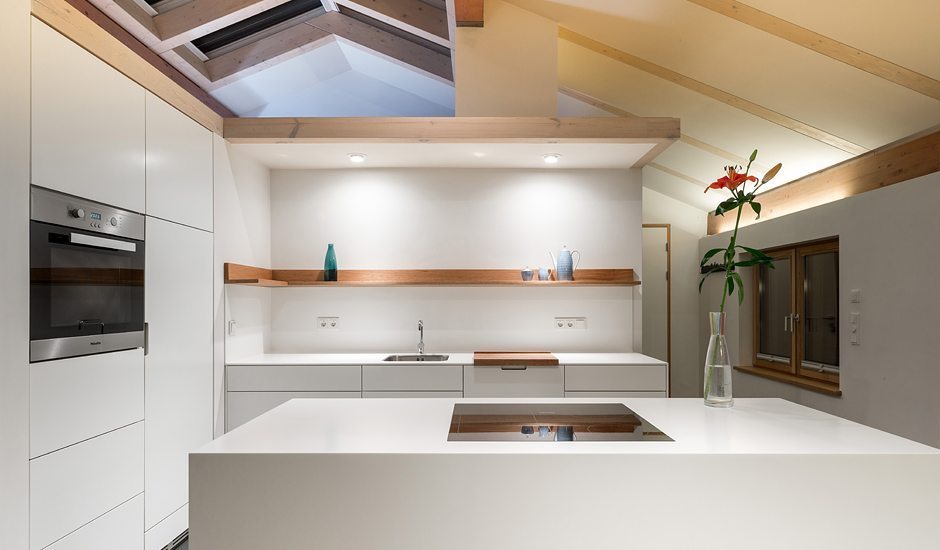 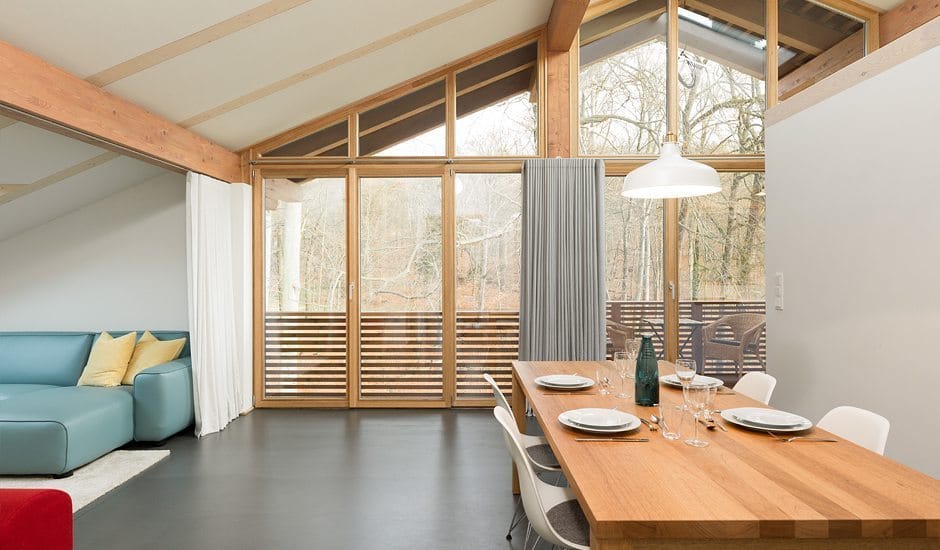 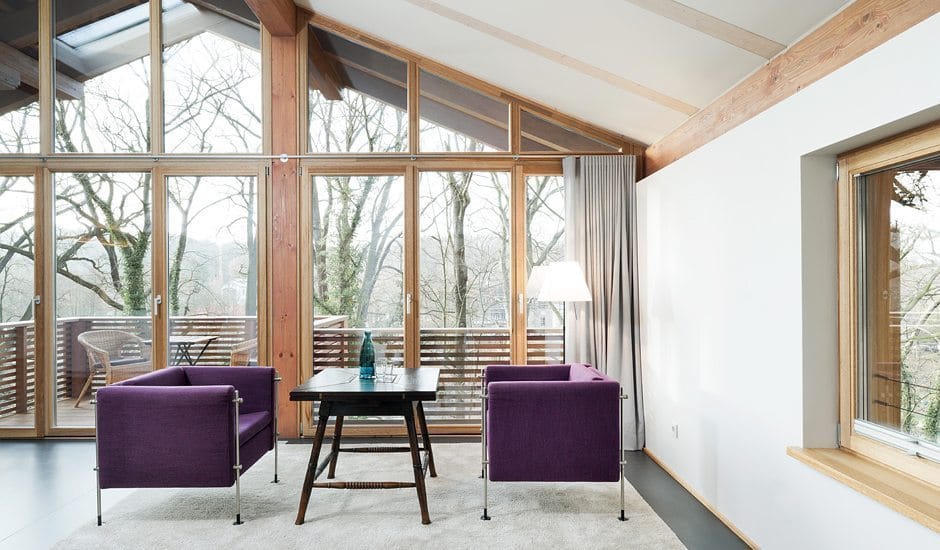 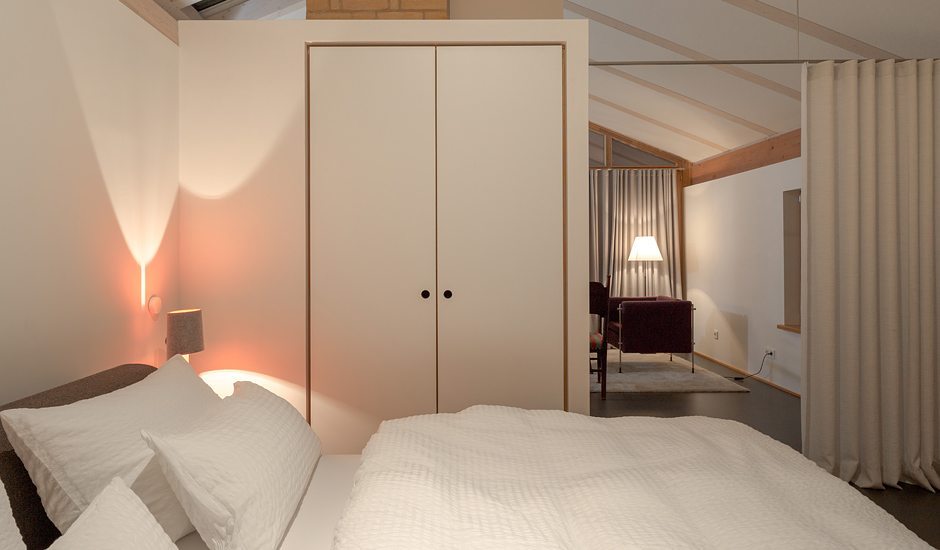 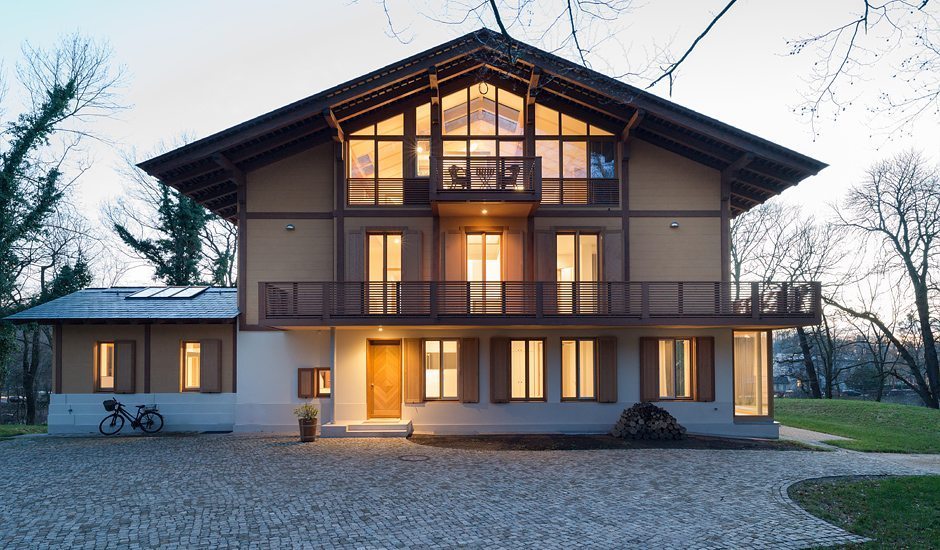 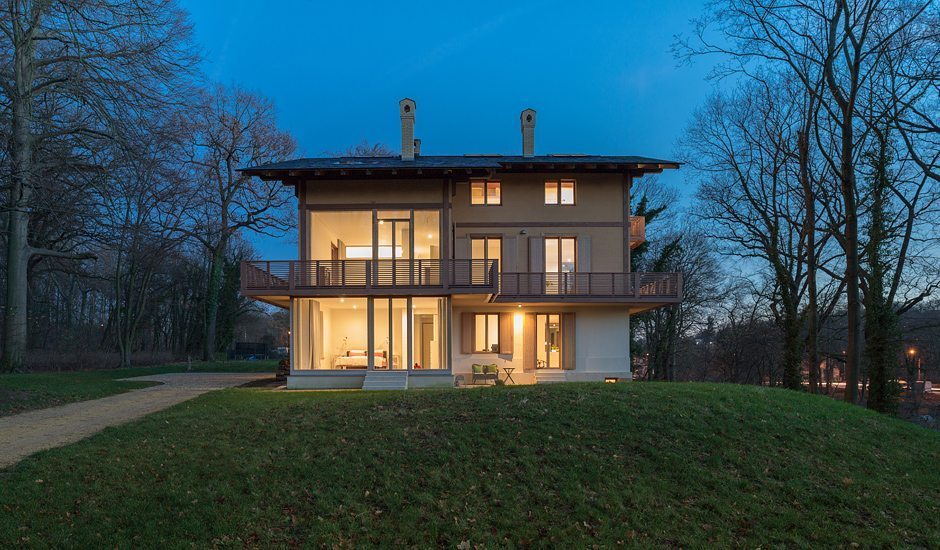 In the 19th century, an ensemble of “Swiss” houses was built in the district of Klein-Glienicke in Potsdam, some of which were destroyed during the construction of the Berlin wall and the period of Germany’s division. The Parkchâlet Potsdam replaces one of these lost houses. The new house is a modern interpretation of its predecessor, on whose foundations it was built: the slate roof with its characteristic chimneys and wide roof overhangs, as well as the surrounding balcony and overall colour scheme, all follow the historical model. Unlike the original, however, the new building has large window fronts, glazed gables and upper lights flooding all six apartments with plenty of light. Be it from the kitchen, the sofa, the shower or the bed, the seasonal changes in the idyllic parkland are always in view. The differently sized apartments are furnished in a simple and modern style. And at least one antique piece of furniture adds an individual touch to each.

Three parks and castles are in close proximity, the center of Potsdam, the new Barberini Museum, and other castles and gardens as well as the sights of Berlin are also within easy reach.

The house is less a reconstruction than a reinterpretation of the old building. The apartments are perfect for exploring the sights of Berlin and Potsdam, and then relaxing with a view of the picturesque park landscape.

Scenery: Parkland on the outskirts of Berlin and Potsdam

Number of guests: 6 different apartments, depending on apartment 2-6 people

The calendar displays the current availability of the accommodation. Days with a dark grey background are not available, while days in light grey or white are free for bookings.

My husband and I visited Park Chalet Potsdam and stayed in the flat Uber den Dingen in the beginning of August 2020, after we canceled an international trip and decided to stay in Brandenburg instead. The apartment was like a dream house for us. During our visit we would say each other “it can’t get better than this!” Uber den Dingen is on the top floor with several skylights and a balcony among the tree canopy. Even though the surrounding area, Potsdam, Babelsberg, and Klein Glienicke, are gorgeous and filled with places to visit (Pia recommended many!), it is difficult to tear away from the house. Sitting inside you can watch for hours as the shadows slowly snake across the walls, the sunlight catching the kitchen counters in stripes like a zebra. We ate breakfast every morning on the balcony and would return in the cool evening for dinner and drinks. Through the canopy you can watch as the sunset transforms the background, from blue, to orange, to magenta. We couldn’t ask for a more perfect house to spend a few days on our own, away from the city, schedules, and screens. On our last night, we invited friends to stay with us. The futon in the living rooms folds down and fits two nicely. Pia was helpful and kind throughout our stay, providing us with bed sheets and towels for our guests. We spent the next day swimming and lounging in the shade at a nearby lake. It was the perfect summer vacation spot. It doesn’t get better than this!

We stayed at the Curiosity Parkchalet apartment and everything was really perfect. The location in the woods is beautiful and evocative and the quality of the apartment is impressive. The Curiosity apartment has large spaces very well distributed and is also perfect for a large family like ours (7 people in all …), everything is of the highest quality: the design of the house, the materials used, the finishes, the very tasteful furnishings, the view from all the big and bright windows. The equipment of the house (appliances and accessories in the kitchen, the equipment of the bathrooms …) is super complete and excellent. Potsdam is a very pleasant place in itself with many beautiful things to see and an excellent base for reaching Berlin. Coming back here in the evening after a long day in the big city is like going back to an oasis of peace and tranquility. The owner Pia was very kind and helpful, she made our stay very smooth and pleasant. We would never have wanted to come away and for sure on our next trip to Germany we will come back here again.